A Clutter of Information about Clutter 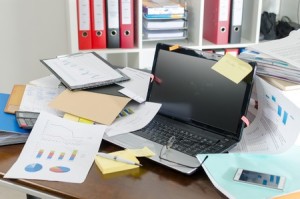 It makes sense that we would be reminded at the beginning of the year, when we’re all fortified with New Year’s resolutions, to resolve to get around to decluttering. It seems that everywhere I look I’m finding helpful hints of how to do that.

I have only occasionally dipped into the world of decluttering because I have relied on my wife Margaret, a natural neatnik and a supremely organized person, to keep our home in order. Are you old enough to remember when televisions had “rabbit-ear” antennas on top? After Margaret would clean the television room, she would end by clapping the antennae into an upright position with a snap. For years we pantomimed this gesture when we wanted to say, “Yes, everything is in order.” I have also praised her list-making system in these pages and in my book, and through it she has kept our home and activities in order.

Still, that doesn’t mean I shouldn’t lend assistance to her, or at least learn how to not get in the way. Over the years, some of the advice to the organizationally-challenged has changed, and some has reappeared in a new form many times over.

In the 1980s, cleaning expert Don Aslett published Clutter’s Last Stand, one of the most popular of his many titles. His claim to fame was to communicate the techniques and tools of a professional cleaner to the average homemaker so that she (or – shocking for the time – he!) could clean faster and more economically. His advice on clutter is to toss it, and his book is filled with inspiration on overcoming the internal resistance to doing so.

In the 1990s, organization expert Julie Morgenstern took a more gentle approach in her book Organizing From the Inside Out. Much of the basic advice is the same, but she advises that – once the clutter-clearing dust has settled – you examine your own life and interests when deciding where the things in your life should go.

Starting as a web forum participant in the early 2000s, Marla Cilley (famous now as FlyLady) grew an immense and loyal internet following through her system of changing habits via “baby steps,” cleaning by zones a little bit each day, and lovingly accepting one’s own organizational imperfections. To her, “clutter cannot be organized,” and she places great importance on tackling even a bit of it regularly each day.

Today’s new organizing guru is Marie Kondo, whose 2014 book, The Life-Changing Magic of Tidying Up: The Japanese Art of Decluttering and Organizing, was a world-wide bestseller, and whose new book, Spark Joy: An Illustrated Master Class on the Art of Organizing and Tidying Up, seems to be on the same trajectory.

If you take only a superficial glance at her KonMari Method, it seems to be about folding and arranging clothing and other items into mesmerizingly neat and tiny arrangements. She is featured in many hypnotic YouTube videos demonstrating this aspect of her method, and you will probably learn a tidier way to fold shirts from her, if nothing else.

Her system goes well beyond that, however, ultimately focusing not as much on what to discard, but on choosing what to keep based on how much joy it brings you. It even gets downright mystical. For example, in her second book, to determine whether or not a series of books gives you joy, you may want to arrange them in a stack and hug it to see how it makes you feel! That’s a little far out, even for me, but her passion certainly has had an effect on people.

Among her more pragmatic pieces of advice, she advises the opposite of FlyLady: When decluttering, pick one category, scour your entire home for items in that category, and sort through them all at once. Seeing all twelve of the similar shirt, for example, will make it easier to know which are your favorites, and the lift from completing the task will be a reward in itself.

The reoccurring thread in all this advice seems to be that clutter will not make you happy, and whatever does make you really happy is not clutter. I may not reach my wife’s levels of neatness, but I have certainly felt the pleasant effects of letting go of old things as my life and my interests change. And now, while we are still in the New Year’s mood, is as good a time as any to begin the process again.

Bill Primavera is a Realtor® associated with William Raveis Real Estate and Founder of Primavera Public Relations, Inc., (www.PrimaveraPR.com). His real estate site is www.PrimaveraRealEstate.com, and his blog is www.TheHomeGuru.com. To engage the services of The Home Guru to market your home for sale, call 914-522-2076.