When It’s Time To Buy a Carpet, Some Things To Consider My Personal Campaign to Paint Every Front Door Red and Why

A Miracle in Home Improvement with Woman-to-Woman Talk 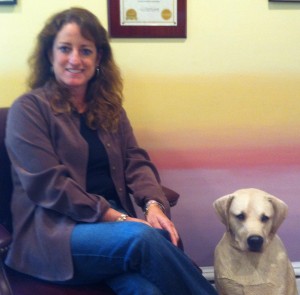 Mary Sniffen who with her husband Robert owns Miracle Home Improvements. She’s the one who handles sales with the decision makers: other women.

For several years now, I’ve noticed that my Home Guru column has enjoyed advertising support by Miracle Home Improvements, but I didn’t know anything about the company, so I thought I’d call and introduce myself. When I asked for the owner I was directed to Robert Sniffen.

I thanked him for his company’s support and asked if there was anything that he would consider unique about his services. “I certainly do,” he said. “I have a secret weapon: my wife Mary. She is my sole sales representative and she is very successful at it because women are the decision makers about home improvements and they relate better to another woman.”

In thinking about that, I realized that for the many years I’ve been a homeowner, I have never once encountered a woman to pitch a home improvement job to me. Yet, I have always deferred to my wife to make the final choice about design elements and colors, so it made great sense to me that a woman should work with a woman about such decisions. I wanted to meet Mary and learn more about her as a home improvement consultant and salesperson.

When I arrived at the company’s building on 9A in Croton, I saw that one side of it was a patchwork of different siding materials as was the garage. Once inside, I shook hands with Robert and was about to pet a blond lab when I realized it was a realistic sculpture of the Sniffen’s real life dog Lucy who had grown too old to make it to the job each day as the office dog. When I met Mary, I wasn’t prepared to be pleasantly greeted by a lookalike for the singer Amy Grant, even with the same quality voice.

But any resemblance to an entertainer quickly faded as Mary launched into her tour of the showroom where she demonstrated her expertise of the products and services she represents, the siding, the roofing, the windows, and doors, all incorporated into the showroom space as they would be into a home.

When I admired a greenhouse window , I was surprised to learn that it cost over $2500. “You can buy one at Home Depot for $900” Mary told me honestly, “but it is not of the same quality,” and by the time she had shared with me all the special qualities of this window compared with the cheaper version, I was convinced I’d go with the upgrade should I buy one.

When we finished the tour, I asked if we could sit down and talk about woman to woman sales. I learned that the Sniffens had been in business together since 1999 after having met and worked together for another contractor.

They bought their building after it had served as a meditation center and the aura of tranquility still lingers on in the persona of their business with the walls of their conference room painted like a sunset. “Our business is based on honesty,” Robert said, with Mary chiming in, “and we’re ethical…we care about our customers.”

“We do one job at a time,” Robert continued,” and we say when we can start the job and what it will cost. Then we have Mary who is the only woman in the business who is in the field, actually hands-on, and has more knowledge than most people in the industry. It’s women who make decisions about home improvements and they form a bond with Mary.”

“Yes, it’s true,” Mary concurs. “Ninety percent of the time I deal only with women among our customers and men are not involved at all in the decision making.”  Mary and Robert agree that in home improvement, relationships are built on trust and performance and they last for years.

With permission, the Sniffens give each prospect a list of over 300 customers’ names, addresses and telephone numbers with a description of the jobs they’ve done for them. “We invite them to call any one of them for a reference. That’s how confident we are of our work,” Robert said.

“And our greatest asset is our people who do the actual work who have been with us from 12 to 15 years. We don’t hire off the street,” added Mary.

When asked about how the company was given its name, Mary replied, “It’s based on the miracle that happens when we come in on budget and on time!” If you want a miracle in your own home improvement project, visit www.miraclehomeimprovements.com, then call 914-271-9119.