Musings about Homes, from Toilets to Death and Taxes Back Story of Realtor Dangers that Everyone Should Know

A Shorthand Method to a Work-Free Garden 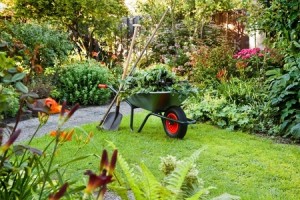 When I was younger, a feeling of near-euphoria would greet me at the first breath of spring as I would anticipate my first days in the garden. Year after year, I could always be assured that I had at least five or six months ahead of me where, whenever stressed, all I had to do was put on my garden gloves to zone out and unwind.

In ensuing years, however, that enthusiasm dampened somewhat, first by  “gardener’s knee,” then by a schedule that sometimes had me choosing the easy chair and TV for relaxation in any free time rather than anything more strenuous in the open air.

Yet, I still wanted to have my property looking its best, especially now that it’s on the market with an increased schedule of showings. At the same time, I must keep my weekend outdoor maintenance chores to tight time constraints.

Here’s my shorthand to planning a low-maintenance garden that will eventually require only a one-weekend planting schedule, another for clean-up and only occasional touch-ups from spring to fall.

My main objectives in creating an attractive but low-maintenance property were to plan for as much color as possible throughout the spring, summer and fall and to beat the weed and deer-munching problems.

To accomplish the first goal, I spend my first years of ownership in planting foundation flowing trees and shrubs that promised to return year after year, requiring only pruning either in the spring or fall. These include spring blooming apple and cherry trees, lilac, forsythia, azalea, and rhododendron and late summer blooming Rose of Sharon.

I always considered carefully which plants I put into my garden and which I kept out. On the “out” list were roses, which can kill you from the constant attention needed (except for the “Knockout” variety which are more forgiving), and annual flowers for cutting which can be as intense a process from seedlings to the eventual cut as raising a child.

“In” was anything that blooms every year with no attention from me, such as phlox, Shasta daisies and Black-Eyed Susans, which return ever year if properly watered and fertilized, naturally or otherwise.

Accompanying those bursts of color were swaths of daffodil, crocus and hyacinth bulbs planted decades ago in wire cages to keep the squirrels at bay.

For colorful ground cover that spread like wild fire, I planted clumps of periwinkle whose purple blossoms last for weeks.  Another trusty foundation planting of several varieties has been hosta, also blooming in spires of purple and white.

In the spring, just a bit of time is required to trim spring flowering shrubs right after blooming for thicker growth and more blooms next year. And, just as you are tending to the perennial beds, the earliest spring bulbs will be blooming. Afterwards, be sure to deadhead them (remove the remains of the blossoms) but don’t remove the leaves. Let them die back naturally so that they can feed the bulbs for next year.

For time efficiency, the concept of annual flower beds was replaced by a collection of urns in focused areas of the property, filled with non-destruct geraniums that last throughout the season.

Step two of my no-work garden is the easy way to keep weeds, invasive plants and deer at bay. The principal deterrent to weeds is to employ thick mulch doing its triple-duty miracle work of retaining moisture while inhibiting weed growth, plus adding nutrients to the soil as it decays. I have a money-saving trick in achieving a thick mulch look. Regular mulch can be quite expensive, so I ask my friends who cut and prune my trees to drop a full load of really clean chips near my driveway, and I use them in all my garden beds as a first layer. Then, I cover that layer with a mere skin of the more expensive mulch.

My third element for easy gardening is to utilize certain products necessary to keep the invaders of the garden, both plant and animal, at bay. One is the fabulous Preen, those tiny granules keep weeds from germinating. Another is Round-Up, which kills those invaders like grout weed that are not destroyed by Preen (a recent gardening column advised readers that the only way to get rid of grout weed was to move!). I spray the Round-Up directly on the leaves of this garden predator and systemically, they die off.

And the third product, Bobbex, keeps the deer from wishing each other bon appétit over my hosta and geranium flowers (they don’t much like the rest of the plant). While Bobbex must be sprayed at least once a month to continue its effectiveness, it’s a small price to pay to assure that you won’t lose an entire bed of plantings to one evening of deer indulgence. (Also, spray again if there is a tremendous rain storm.)

And, be mindful of what William Shakespeare wrote: “Sweet flowers are slow and weeds make haste.” With the tricks outlined here, you can enjoy the sweetness of the flowers and make haste in banishing the weeds, along with Bambi.

Bill Primavera is a Realtor® associated with William Raveis Real Estate and Founder of Primavera Public Relations, Inc. (www.PrimaveraPR.com). His real estate site iswww.PrimaveraRealEstate.com, and his blog is www.TheHomeGuru.com. To engage the services of The Home Guru to market your home for sale, call (914) 522-2076.