You May Not Believe this Personal Story, But I Swear It’s True A Wild Story Illustrates What Do-It-Yourself Chores to Avoid

A Woman Toughs Her Way Through Construction to Real Estate 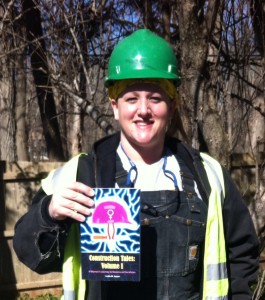 When I was an Operations Officer at The Culinary Institute of America in the 1970s, I looked around and saw that only two of the 1200 enrolled students were women. I knew that something was wrong and set out on a promotional campaign to open American kitchens to women chefs.

By the time I left the Institute in 1980, a third of the student population was female, and today when I read about remarkable achievements of women chefs, I feel that somehow I had a little something to do with that.

It was only natural that when I showed up recently at Author’s Day at the Mahopac Public Library to talk about my book, “Musings of the Home Guru,” I was delighted to find myself seated near an author named Leslie M. Jasper who had written a book called “Construction Tales: Volume I, A Woman’s Journey to Become an Electrician.” Involved for a dozen years in real estate and construction, I had never met a woman electrician, and I couldn’t stop myself from asking how she came to choose that line of work.

“It came by way of the military,” she responded, explaining that she tested for a military assignment as a 17 year old and between an airplane or construction mechanic chose the latter believing it would have greater application in civilian life. Soon after, she fell in love with another service person who was from New York, married and arrived in Westchester at age 19 with a husband and baby in tow, quickly becoming a member of the electrician’s union.

But tragedy struck when her baby Tom was only 18 months old. Her husband was killed in a motorcycle accident and suddenly it was urgent that she pursue her chosen line of work and become successful at it.

“I grew up with a father who told me that I was smart, strong and capable of doing whatever I set my mind to doing,” Leslie said. “What others found shocking and daring, I found natural.

“Acceptance is very important when a woman steps into a man’s industry and attempts to become an electrician,” she continued. “In the beginning when I was given an assignment here and there, some of the guys would call me ‘Monica,’ a crude way to imply how I was getting my breaks, but I carried on, working as hard as I could to learn my craft. Once I showed how hard I was willing to work, guys were more willing to show me how to become an electrician. It never made sense to me that a woman could not handle a task strictly based on the fact that she is a woman. If anything women typically have an eye for detail and are very thorough when doing a task”

Leslie embarked on a five and a half year apprenticeship to become a journeywoman electrician that earns her the right to compete independently for jobs without having to be under the direction of another electrician. She was doing very well though the good years, but after 2009 when the effects of the recession caught up with the construction trades, she found herself largely unemployed. She went back to school to earn a master’s degree in business and looked around for part-time work.

During the course of a subsequent interview for this article, she happened to mention that she knew everything about construction, having bought a foreclosed home in Carmel in 1996, gutted it and rebuilt it from scratch and that, incidentally, she’s had a real estate license since 2007, albeit inactive since 2011.

A light bulb went off in my head and I closed down the interview with my final question: “What are you doing looking for part-time jobs? You’re perfect to be a real estate agent!”

Just imagine those first time buyers looking for a fixer upper and having Leslie as their dynamo agent and advisor with her kind of background, knowing exactly what needs to be done and how to do it.

Welcome to your new job, Leslie. Welcome to The Home Guru Team! If you want Leslie to help you find a home, call her through our team at 914-522-2076.

To know more about this extraordinary woman, Leslie’s book can be found at Barnes & Noble and on iTunes.