If a Woman Is Treated like “the Little Woman” by a Contractor About that Most Practical Room, the Kitchen Pantry

At Home with John G. Testa and the Arts & Crafts Style 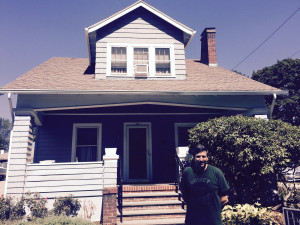 Westchester County Legislator John G. Testa of Peekskill in front of his Arts and Crafts home, in his family since 1940.

For a politician, John G. Testa, Westchester County Legislator, says he’s too sentimental about most things, including his hometown of Peekskill where he was born and bred and particularly his Arts and Crafts home which has been in his family since 1940.

“I am the fourth generation of my family here in town,” Testa said recently, “and I have moved only two blocks from the home in which I was born when I acquired this house in 1984, where my two great aunts had formerly lived.”

Built in 1928, the modest three-bedroom, one-and-a-half bath, 1400 sq. ft. house became Testa’s renovation project for some years. When asked to what extent he worked on the house, he answered, “Everything possible! It has been totally redone, from the heating system, converting to all natural gas, electricity, plumbing, restoring all the windows, the roof and the renovation of every room.

“Fortunately, I was young and had the knowledge of how to do it,” he said. “I should also point out that my wife Nancy was a partner in the various projects we have done on the house and has lived through quite a bit of upheaval as major renovations were in progress. We raised two great children, John Jr. and Katy in the home, who also lived through and helped with the projects.”

Today the home stands as a testament to a great period in American architecture which comes under the category of Arts and Crafts. But many people are not quite sure what the characteristics of the style are.

The Arts and Crafts movement evolved around the turn of the 20th century as a backlash against the fussy style of the Victorian era, instead subscribing to a more natural aesthetic and traditional craftsmanship. While Testa’s house is modest on the scale of homes produced during this period, it was also the very upscale purview of such great artisans as Gustav Stickley and William Morris, and it characterizes much of architect Frank Lloyd Wright’s work.

Arts and Crafts style is said to be driven by clear design guidelines, refreshingly honest and pure in spirit. Some consider the movement most closely identified with wood as its single most important element. While oak established itself as the iconic wood of the style, Testa’s home features chestnut woodwork, which is significant in that American chestnut trees were literally wiped out by a blight in the first part of the 20th century.

There is also a color palette associated with the style: subtle, muted tones taken straight from the natural world, which Testa’s interior decoration reflects, while its exterior has been fully restored from its substantial, characteristic front porch to its shingles, painted in a rich grey.

The home sits on a 50 ft. by 140 ft. corner lot facing a park across the street which served as a training camp for the New York Jets when he was a child. “What an experience it was to be walking out of my backyard and seeing Joe Namath working out on that field!” he said. At the time, Testa would come to his aunts’ home to help with various projects, “so you might say that I’ve been working on this house all my life,” he said.

Considering that Testa served as Peekskill Mayor for three terms, from 2002 to 2007 and is now in his third term as County Legislator, it is surprising to hear that “I was never really interested in politics. I have always been a school teacher, in the Peekskill and Lakeland School Districts, teaching both technology and social studies,” he said, “and came into politics as a natural kind of progression, serving first on Peekskill’s Conservation and Parks Advisory Board and the Peekskill Zoning Board.”

Nonetheless, his efforts as a politician yielded great results. When he first became Mayor, Peekskill had a fund balance of just over $1million and, by the time he left, it had soared to over $11 million.

After teaching for 33 years, Testa retired two years ago, to devote more time to all of his other activities for the community and the county, and to enjoy his home.

As a big promoter of his home town, Testa said, “I’m so happy to see that Peekskill is getting back to public outreach. Private investment is coming back, along with historic preservation and new residential developments. I see a bright future for Peekskill as a great place to visit and to live!”

Bill Primavera is a Realtor® associated with William Raveis Real Estate and Founder of Primavera Public Relations, Inc., the longest running public relations agency in Westchester (www.PrimaveraPR.com). His real estate site is www.PrimaveraRealEstate.com and his blog is www.TheHomeGuru.com. To engage the services of The Home Guru and his team to market your home for sale, call (914) 522-2076.