Surprising Information about Carpets vs. Hard Flooring and Air Quality All Sorts of Things Can Hang from the Ceiling, but Carefully Please

Brick by Brick: The Easiest Way to Build a Patio from Scratch 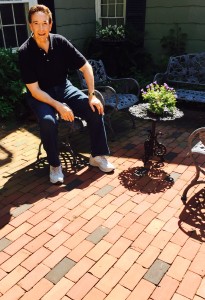 The Home Guru enjoys his brick patio, laid in a bond pattern which requires little cutting, the easiest do-it-yourself installation over leveled gravel and sand.

When we moved to Westchester in the early 1970s, our home had a curious architectural twist: the front and the back were switched, as is frequently the case with 18th century farmhouses. At some point, the previous owners opted for privacy over curb appeal and hid the grand front porch and expansive lawn behind a tall hedge and took to parking their cars in an unpaved half-circle in the rear of the house, entering through the back door beneath a towering maple tree.

We chose to continue to embrace the back of the house as our entrance, and we spiffed it up accordingly. I dressed the driveway with fresh 3/8” crushed bluestone and built up low flower beds on either side from stone. The sloping walkway leading to the front door was replaced by broad, bluestone steps. The largest project of all, however, was replacing the patchy shaded lawn underneath the tree with a large patio.

The paving material of course would have to be brick, for two reasons: it’s the easiest material for a do-it-yourselfer to accommodate; and, I believe it offers the warmest and most informal texture to a country landscape. Personally, I have favored brick as a surface since my days at The College of William and Mary in Colonial Williamburg and I traversed the uneven brick-lined walkways there daily.

For those of us who live in regions that get below freezing during the winter, a brick patio laid on sand can be an excellent choice for an outdoor living space. The small gaps between the bricks and the grains of sand allow for slight movement when any moisture in the ground expands or contracts with the change in temperature, unlike a more rigid surface which may crack.

The first step was to cut away the old lawn, which was hardly a lawn at all in the deep shade of the maple, and dig a level space into the ground, deep enough to hit the more soil clay-like layer below. The step I didn’t take, but perhaps should have, was to rent a compactor to make this base truly level. Indeed, my patio would always have a mild undulation because of it, but to my eyes this has been part of its hand-hewn charm.

Next came deliveries of gravel and sand, three cubic yards of each for a 20 ft. by 20 ft. space, in separate mounds behind the garage. I then used my big red wheelbarrow to make what seemed to be hundreds of trips between the garage and patio site, first laying down gravel, two inches deep, and then sand at the same depth. I leveled and tamped down the surface carefully. Had plastic edging been available to me back then, I would certainly have installed it in a well-camouflaged fashion, but I settled instead for flat field stones to provide edging for the sand and brick to be laid within it.

When the sand was leveled and I was ready to lay the brick, I opted for a standard running bond pattern where the edges of two bricks meet under the center of the bricks above them. Had I wished, I could have opted for many other varieties of patterns instead, such as herringbone, basket weave, or radial designs. With a little ingenuity, a homeowner could even incorporate different sizes or colors of bricks to create a unique design. As for me, the contrast between the red of the brick and the gray of the field stone was intriguing enough, so I chose a more simple pattern to complement those colors. Besides, I didn’t want to get into the chore of complicated cuts in the brick. At the end I swept a fine layer of sand in between the bricks, and I was done.

For the most part, the patio was perfect. The only flaw in the design is that the patio was on the north side of the house, so we always had to shovel snow away cleanly from one end to the other as the sun would not melt it for us.

It took a summer’s worth of work for me to build the patio, but the end result was worth it. We had many years of outdoor dining and relaxing under the shade of that large maple, and when that old centenarian eventually succumbed to disease and had to be cut down, the patio still looked well-designed and front door-worthy under the direct light of the sun.

Bill Primavera is a Realtor® associated with William Raveis Real Estate and Founder of Primavera Public Relations, Inc., the longest running public relations agency in Westchester (www.PrimaveraPR.com). His real estate site is www.PrimaveraRealEstate.com, and his blog is www.TheHomeGuru.com. To engage the services of The Home Guru and his team to market your home for sale, call 914-522-2076.