The Wacky Ways of Decorating for Motivation and Inspiration The Kitchen Trends Again to White, Now Iced but Red Hot

Can You Tell Me Why, Oh Why, This House Hasn’t Sold? 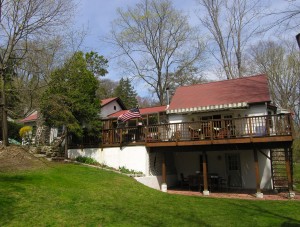 You’ve not likely seen a real estate column like this where a realtor acknowledges being in a quandary about why a house hasn’t sold when it should have long ago, and ponders why, generally, some houses get snapped up right away and others linger on the market for weeks, months, or even years, without a serious offer,

The quick answer might be it’s all a matter of price, but that isn’t always the case. Let’s look at some reasons a house sometimes doesn’t sell in a reasonable time frame by using as an example a particular house I have listed, with the owners’ permission, of course.

This house is located near a lake in Somers and is owned by a couple who have had a bumpy journey in finding their buyer for what I consider a very special property.

It’s special because it’s had some creative concepts incorporated into it as it grew during the seller’s ownership from a small cottage/ranch, to two/thirds more in square footage (now 2200 sq. ft), having had a two-story wing added just a few years ago. It’s on a lovely landscaped property and, albeit on less than a third of an acre, is surrounded by New York State protected land.

It’s been retrofitted with every convenience and has focused on private, outdoor living three seasons a year with an expansive deck overlooking woods and seasonal lake views. It’s beautifully maintained and is anything but cookie-cutter, so tell me, why hasn’t it found a buyer since it’s been on the market, off and on, since June of 2010?

According to a survey done among housing experts earlier in the year for US News & World report, the top reasons for a house not selling are that it is: 1) priced wrong; 2) in run down condition; 3) not run-down but has tell-tale signs that it might be (like a water spot on the ceiling); 4) reflecting too much personal taste; 5) not easy to show; 6) not marketed well enough (hey, I’m the one who’s marketing this house!); and, 7) poorly laid out or badly located. Not factored into this survey was the fact that a house could hang around unsold, longer, as the economy was pulling out of a recession.

Maybe price was an issue when it was listed at $399,000 which was perhaps five percent over the price range I suggested to the owners. However, because of the home’s inherent charm, it had many showings but no offers. When the price was reduced by $7,000, it did get an offer from a young family who was crazy about the place. But, then they brought their parents to give their blessing, and you know the old story about how parents can be “the kiss of death” to a home sale and in this case they were.

When I pressed the buyer’s agent for the reason, it was given simply that the parents felt it didn’t have enough storage space. And while there is no garage, there are two attics, not one, and a storage shed on the property. What did his clients want, the other agent asked, a Westy self-storage facility?

After a year and a half and a number of open houses and price adjustments, my clients and I got together again and went through the list of comments received as feedback from the many showings, and the owners decided to correct every perceived shortcoming and to lower the price once again.

Because some prospects thought the kitchen was too small, it was enlarged by breaking out the pass-through. Not enough closet space in the bedrooms was addressed by reconfiguring a hallway and building new, expanded linear closets with California Closet-style shelving and hanging racks. Add to that a new paint job, new white carpeting in the bedroom, adjusting the price to $349.900, and, despite the long period of gestation, we’re ready again for our close-up…and an offer.

Persistence and a considered amount of re-staging and re-purposing seem to be paying off with the past couple of showings, the last eliciting feedback from the showing agent that said, “My clients loved the house and are considering it.” OK. So, where’s that offer?

Bill Primavera is a Residential and Commercial Realtor® associated with Coldwell Banker, as well as a marketer and journalist who writes regularly as The Home Guru. For questions about home maintenance or to buy or sell a home, he can be emailed at Bill@TheHomeGuru.com or called directly at 914-522-2076.