Coffee Tables, Both Simple and Diverse 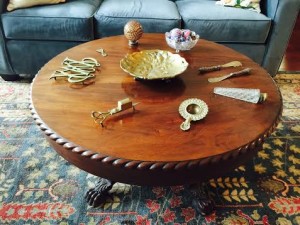 The Home Guru’s coffee table with its odd assortment of collectibles.

The classic sitcom Seinfeld may rival Shakespeare for the number of neologisms it has given us—“low talker,” “regifting,” and “anti-dentite” among them—and it has also brought us the holiday Festivus and the career of The Original Soupman. But there is still one area of the Seinfeld universe that has yet to come into being: I am still waiting for my coffee table book about coffee tables.

Okay, granted, Alexander Payne published The Coffee Table Coffee Table Book, a collection of a few avant-garde coffee table designs, but it didn’t seem to measure up to the all-encompassing exploration that many of us envisioned Cosmo Kramer producing. It also did not unfold into its own coffee table shape.

The original coffee tables were actually tea tables, developed in the late 18th century in Europe and Britain. These tables were quite a bit higher than the coffee tables we are used to today, and they initially were placed behind the sofa. Human nature being what it is, eventually other items found their way to this new open surface; lamps, books and other amusements.

These early examples evolved into the lower models that made their way to the front of the sofa, although the history of this transition remains unclear. Two possible cultural influences on the Victorians may be the chabudai, a low table found in traditional Japanese homes, and the tables used in tea gardens in the Ottoman Empire.

With the mechanization of manufacturing during the Industrial Revolution, the basic design was standardized to the low and unadorned form we know today. J. Stuart Foote, president of the Imperial Furniture Company, claimed all the credit for inventing the coffee table himself in 1920, and marketed their functionality to Americans with vigor. Some have even theorized that the introduction of television into the average suburban home helped solidify the basic design of these fixtures, the low profile of which could accommodate beverages and TV dinners without obstructing the view of the screen.

Every design trend has created its own version of this simple fixture, including the return to a handmade esthetic in the Arts and Crafts movement, the strong geometric shapes of Art Deco, and the industrial-inspired use of glass and steel with purity of form in the Bauhaus movement. Perhaps the simplicity of the form of the coffee table helps give designers greater freedom in their creativity.

In my own home I have a very large, round 19th century table which I found on one of our early antiques expeditions when my wife and I operated a weekend antiques business. In addition to holding drinks, it has served as an expression of my interests and individuality, as it does for many. This semi-private, semi-public surface can hold seasonal decorations, game controls, remotes, family photos, and yes, coffee table books. In my case, I have used it to display my love of antique collectibles, and my coffee table carries an odd assortment of brass items, a candle snuffer, a tea strainer, butter knives, a trivet, a crystal bowl of vintage marbles and, inexplicably, a beautiful newel post glass ball. Vive la différence.

Today the design of the coffee table seems to be returning to its original taller design, with top surfaces that elevate horizontally. Part of this function is to allow access to storage underneath, but part is also to bring one’s laptop up to a comfortable level for typing or video streaming. Ergonomic, surely, but perhaps less condusive to the face-to-face gathering that these tables used to cultivate.

Bill Primavera is a Realtor® associated with William Raveis Real Estate and Founder of Primavera Public Relations, Inc., the longest running public relations agency in Westchester (www.PrimaveraPR.com). His real estate site is www.PrimaveraRealEstate.com, and his blog is www.TheHomeGuru.com. To engage the services of The Home Guru to market your home for sale, call 914-522-2076.