Is Your Ceiling Height a Trip for Alice in Wonderland? When Buyers and Sellers Want Realtors to Be Big Blabbermouths

Decorative Wrought Iron for Unique Art Inside and Out 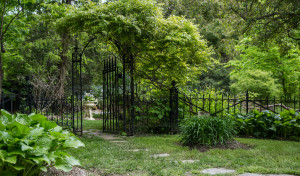 For the Home Guru’s garden, Fitzgerald fashioned this fencing and gate from salvaged antique iron pieces.

It had been a long time between visits with blacksmith Bill Fitzgerald. The last time was almost 30 years ago when I asked him to assemble on my property a number of wrought iron elements — fencing and columns — that I had collected from various salvage companies and antiques shops. Expertly, he welded the old pieces together with new elements he had fashioned to create a 50 ft. fence and fancy gate, from 4 ft. to 7 ft. high, that serve as an entrance to my garden and pool area. Each and every day since that time, I have enjoyed looking at that unique work of art as an addition to my landscape.

This time around, I wanted to observe Fitzgerald in his workshop and to talk about what homeowners prefer today in the use of decorative wrought iron.

As for me, I fell in love with it when I was in college studying art history. Iron has been around since 4000 BC but it was the Hittites around 2000 BC who first learned the smelting and purification methods required to produce it. It served primarily to create weapons and other utilitarian purposes until the Renaissance when it was “wrought” or hand-worked into beautiful shapes for ornament on cathedrals and city palaces. In America, it reached its height of popularity as ornament in the 1860s. Now it’s gaining favor again among homeowners who seek originality in their decorative materials. 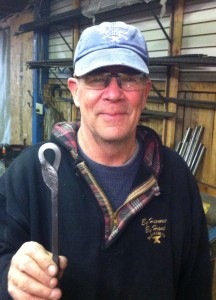 Master blacksmith Bill Fitzgerald displaying a staircase element a customer asked him to recreate from a magazine.

When I bought my first home in Brooklyn Heights, it had no ornament in front, just a broad cement sidewalk. It was my objective to restore the sidewalk area to what it might have looked like in 1826 when the house was built.

I found Paul, a resourceful young man who was in the wrecking and salvage business, and asked him to jackhammer the sidewalk away and replace it with old, reclaimed bluestone slabs. Four feet from the façade of the house, I designed a garden and asked Paul to find an antique wrought iron fence to enclose it. He found beautiful iron fencing pieces and a gate from the mid-1800s, but when I asked where he secured them, he responded simply, “ask me no questions and I’ll tell you no lies.” I don’t know whether he was joking about that, but for the rest of my years in that house, I lived in fear that the iron work may have been ripped from some other house in Brooklyn and that someone would pass my house and exclaim, “That’s my fence!”

When I moved to Westchester, I brought with me the idea of creating beautiful decorative fencing on my property, this time securing the antique pieces myself, and that led me to Bill Fitzgerald.

Visiting him today in his workshop just off route 6 in Mahopac is to witness an artisan at work who experiences complete joy in what he does. “I’m the seventh generation of blacksmiths and farriers (people who shoe horses) from Ireland. I’m the first to be born here.”

He guided me on a tour of his workshop and I was surprised to find that the raw material of decorative ironwork is merely 20 foot lengths of steel in various gauges, some solid and the larger ones hollow.

He told me that no one really works in iron anymore, but use steel because of its greater durability and malleability. Iron is an element and steel is an alloy made of iron and carbon.

Among customer requests for his talents are for outside and staircase railings, gates, fireplace screens and tools, tables, shelves, baker’s racks, wine racks, planters, headboards, curtain rods and chandeliers.

For fencing, Fitzgerald points out that he creates original pieces rather the aluminum product that most companies buy in sections to install. “I create original iron pieces as art but, at the same time, they must all be up to code,” which he describes as fence pickets and staircase spindles that are on 4-1/2 inch centers.

“I enjoy what I do because it’s different every day, whether I’m re-creating a piece that a customer shows me in a magazine or if I’m simply creating a twist in a picket.”

What’s more important, I ask, the functional or decorative aspects of ironwork? He responds, “I create art that is also functional.”

The talent of Bill Fitzgerald also can be seen in decorative gift items at the retail shop called By Hammer, By Hand which he owns with his wife Phyllis, located at 290 Route 6, Mahopac. Telephone: 845-621-1725 Website: www.byhammerbyhand.com