The Freedom of Going Stark Naked (with Windows, That Is) Have You Thought About Where You Want to Live After You Die?

Did You Ever Wonder Whether the Garden of Eden Had Poison Ivy? 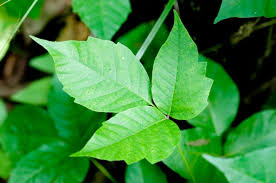 Poison ivy: a pretty leaf which can result in an itchy reaction on the skin, but it does help in the fight against climate change.

When I was a bachelor living in Manhattan, I had an acquaintance who would occasionally visit friends living in “the country” over the summer weekends. Maybe I was a little jealous about not knowing anybody outside the reaches of the steamy city because I found myself having little patience when he called me one day to complain at some length about having contracted a case of poison ivy in his friends’ garden during his last visit. I just didn’t want to pay much attention to his whining.

The next day he called again and this time he upbraided me for not showing any sympathy about his itchy plight. Instead of apologizing and showing some concern, I made the mistake of marginalizing his condition by saying that I had frequently had poison ivy before moving to the city and that, while I found it uncomfortable for a day or two, I would just address it by taking a cold shower, then treating it with calamine lotion. Was it really that big a deal, I asked?

From there, the tone of the conversation degenerated rapidly when he asked, “Would it make any difference to you to know that I even have it on my [genitals]?” At that point, I couldn’t stifle an urge to laugh, but not before venturing a guess about what kind of activity might have brought that situation about. It was his response to that bit of careless banter that put me on notice that it was time for a very serious apology which I offered with great sincerity.

Not long after that incident many years ago, I married, moved to the country and since that time, have had countless opportunities to suffer the effects of poison ivy myself, regardless of the care I take in recognizing the plant and trying to avoid it.

Living on a property that has been gardened since the early 18th century, I have been aware that it is riddled with poison ivy, but I have never done a thing to discourage its growth. Call me crazy, but I rather like its dark waxy leaves growing on vines in the areas of my property that are not cultivated, and, from what I understand, although I don’t remember from which source, it may have served some useful purpose to bind together the mortar-less stone walls our forefathers built to delineate properties and contain livestock.

About two out of three people are allergic to poison ivy and its relatives, poison oak and poison sumac. For some, the reaction can be severe enough to require hospitalization. Treatment for poison ivy is most effective if addressed immediately after exposure. Invariably I always get it on my wrists and lower arms. When I do, I wash the affected area with strong soap and cold water, and then apply calamine lotion for relief of the itching. Hot water may feel good in the short term, but it ultimately makes things worse by opening up your pores, so stick to cold.

It is also suggested that clothing that has been worn when poison ivy has been contracted be washed separately from other laundry but very honestly, I’ve never found that it has been that finicky an issue. Perhaps that would apply to individuals with extreme sensitivity to the allergens.

Everyone knows how to recognize poison ivy, right? The leaves are three-parted, often drooping, with shiny smooth, toothed or lobed edges. The oily resin is called urushiol and causes the contact dermatitis. This binds with skin proteins, causing an allergic reaction. The rash is characterized by linear streaks which may last several weeks. Treatment depends on the severity of the episodes, but systemic steroids have the most dramatic therapeutic effects. New barrier creams are effective in preventing the dermatitis if applied before contact, especially products like Ivyblock.

As a side note, I looked for anything that could justify God’s plan for placing something so nasty in Earth’s garden, if not in the Garden of Eden, and I found it!

According to a recent report in Weed Science and subsequently reported in the Wall Street Journal, poison ivy has gotten much nastier since the 1950s in leaf size and oil content, but at the same time, it was reported that the plant absorbs much more than its fair share of CO2 in the atmosphere. With CO2 having increased 33 percent in the environment in the past half century, poison ivy has risen to the challenge as Earth’s friend in helping to combat climate change. So, leave it stay, I say. There IS something to love about poison ivy!

Bill Primavera is a Realtor® associated with William Raveis Real Estate and Founder of Primavera Public Relations, Inc., the longest running public relations agency in Westchester (www.PrimaveraPR.com), specializing in lifestyles, real estate and development. His real estate site is: www.PrimaveraRealEstate.com and his blog is: www.TheHomeGuru.com. To engage the services of The Home Guru and his team to market your home for sale, call 914-522-2076