Don’t Let Your House Get Caught with Its Pants Down! 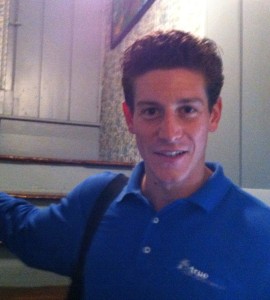 Matt Albano of True View Home Inspections says most any problem is fixable.

While usually it is the function of buyers to order a home inspection once they decide to place an offer on a house, would you consider it an outrageous notion if I were to suggest that you as a seller order an inspection even before you list your home?

Would you think it even more extraordinary if I suggested that you order a home inspection even if you are not considering selling your home in the near future?

I thought about these things recently when Matthew Albano of True View Home Inspections emailed me the design for a brochure he is planning which encourages home sellers to beat buyers to the punch by engaging his services to inspect their homes in advance of listing.

Matt’s note to me reminded me of that cautionary and amusing sign I found on the exit door of the men’s room in that London theatre that read, “Please inspect yourself before returning to your seat.” Who else but the British would remind a gentleman to make sure that he wasn’t walking around with his fly open?

It might seem like a trans-Atlantic stretch, but after a surprising experience I suffered with my own house, I want to place a sign on the door of every house for sale warning that it should be pre-inspected to ensure that it is not caught with its fly open or worse, as in my own case, with its pants down.

Here’s my own story of woe, which I’ve told often and with a vengeance, and involves how I first met Matt.

My wife and I had found buyers for our lovely 18th century home who had ordered the requisite inspection. Since I had completely restored my home and kept it in impeccable shape, I thought nothing of it.

When the buyer’s inspector arrived, however, he avoided my glance for some reason, as though he were a criminal lawyer in a murder case, representing the victim’s family, and I were the accused killer. I decided to leave the premises to avoid apoplexy. When I returned, I was told by the buyer’s agent that the deal was off. I was told that the wife, a skittish type to start with, totally freaked when the inspector found one flaw with the house, just one, that a portion of the sill of the house resting on the stone foundation had been compromised with dry rot. Unfortunately the inspector told her that the house was likely “sinking” as though, like the Titanic, it was about to plunge into the abyss. The wife, without so much as asking if this was something that could be fixed, scurried from the house like a rat leaving the ship, and we lost the sale.

Needless to say, I was turned off by this engineer’s lack of communications skills in describing this defect of which I was totally unaware. He might have told her that it could be fixed, but he didn’t. That’s when I called my own engineer who had been highly recommended by another agent in my office, and that happened to be Matt.

Matt had a much more agreeable manner when he arrived, assuring me that, “my job is to find any problems, not to sugar-coat them, but to suggest ways they can be fixed. I’ve seen very few problems that are unfixable.” This is my guy, I thought! This is the kind of engineer that sellers should know. In my own case, my vengeance comes from telling my buyers which engineers best communicate problems and how to fix them, rather than those who feel they’re doing their job if they kill the deal. I name names.

Bottom line: Matt recommended some contractors who could fix my problem with the sill and I did exactly that to assure myself that, indeed, my house is perfect. Matt came back and did a complete engineering report which I now have in my hot hands, ready to welcome any buyer with full confidence.

Here in a nutshell is the smart reason to do a pre-listing inspection of your own home before placing it on the market: It reassures prospective buyers that there is nothing to hide, that all systems have been checked and that you as a seller have maintained the house well. It also gives you a good position in the negotiating process to stand firm in the price point you want to achieve. To further enhance your standing, you might also want to purchase a home warranty protection program whose premium doesn’t come due until closing.

And if you’re not planning to sell soon, you might still want to do a full home inspection. Who knows what quiet problems may be lurking undetected? Catch those things before they become bigger problems. It could be the best $450 or so that you ever spent.

To reach Matt Albano for either a pre-listing or peace-of-mind inspection, call True View Home Inspections at 914-831-2187. Don’t risk having your home caught with its pants down.

Bill Primavera is a Residential and Commercial Realtor® associated with Coldwell Banker, as well as a publicist and journalist who writes regularly as The Home Guru. For questions about home maintenance or to engage him to help you buy or sell a home, he can be emailed at Bill@TheHomeGuru.com or called directly at 914-522-2076