The Lighter Side of Victorian: Wicker Furniture Comparing Options for Siding

Dusting Off the Subject of Household Dust 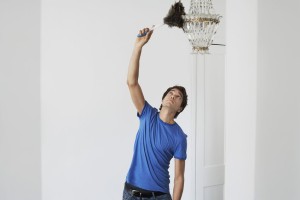 Have you ever heard of a dust fetish? I reluctantly admit to at least a keen interest in the subject, having alluded to it a couple of times in my column musings. For instance, once I learned that the major component of household dust is our own flaking skin, it gave me license to project that if we’re feeling queasy about not having dusted in a while, we could legitimately claim to be uncomfortable in our own skin.

Just recently I learned about a new study conducted by a group of scientists who had collected dust samples from 1,200 homes across the United States. It revealed that we all cohabitate with a few thousand species of bacteria and about 2,000 species of fungi, most of which originate outdoors and probably come inside via soil particles or as airborne spores. Add to our skin cells other flaky stuff like fabric fibers, dust mite excrement, hair, pet dander, regular dirt, debris and micro particles, and you have a pretty nasty brew that can give people with allergies and breathing problems a real hassle.

For anyone interested in forensic investigation, the study of bacteria and fungi in dust can determine whether a home has dogs or cats as well as the ratio of women to men on the premises.

For those with allergy issues, finding a solution can be a quagmire. While some argue that it’s simply a matter of pulling up carpeting and living with bare hardwood floors to control airborne bacteria and fungi, the authors of this new study, state somewhat extremely that “If you want to change your bacterial exposures, you just may have to change who you live with!” Or better yet, “If you want to change the types of fungi you are exposed to in your home, it may be best to move to a different home (preferably far away).” Well, no wonder we encounter so many people who are sniffling and apologetically tell us, sorry, it’s my allergies acting up!

While dust is inevitable, it horrifies some of us, as though its presence on our furniture and floors tells the world something unflattering about us, not only as housekeepers, but as human beings. And some of us just don’t give a damn.

You are probably familiar with the documentary, HBO movie or Broadway version of “Grey Gardens,” in which Jackie Kennedy Onassis’ aunt and cousin, Edie Beale and her daughter, also Edie, are depicted as living in absolute squalor in a neglected ramshackle house, with garbage strewn throughout and a hoard of cats and raccoons relieving themselves on the floor. When Jackie arrives to help remedy the situation and registers her shock at the condition of the property, Edie dismisses the condition of her living environment by saying simply that her daughter “hasn’t been keeping up with the dusting.”

Is inattention to dust the first degenerative step to chaos in the home? Maybe for some, depending on their mental attitude about it, and in turn, how unkempt homes can affect its occupants.

One survey reveals that 83 percent of us are happier in a clean house and the act of cleaning itself gives 57 percent of the population a feeling of satisfaction. Further it shows that 38 percent of women and 24 percent of men experience real stress living in a messy environment.

It would seem that dusting and cleaning can be therapeutic. Psychologists have found that there is a marked difference in mood before and after doing cleaning, just as with a therapy session.

But beyond the psychological and unhealthy effects of dust, it can do real physical damage to most everything it lands on, from furniture surfaces to those things it clogs up like computer keyboards and vents.

There are both fancy and simple ways to get rid of dust. The fancy way is with an air purifier of which there are two types: those with fans that pull air through filters that trap the dust and those called electrostatic precipitators in which an electrical charge is applied to the dust drawn into the device and captured on oppositely charged plates. Both are available as either portable units or as whole-house systems. Prices range from $100 for a portable model to over $1,000 for a whole-house system.

But, among the houses I’ve listed or sold, I was aware of only one couple who had a whole-house air purifier system. So, unless people are plagued by allergies, I suspect that most of us dust with old-fashioned elbow grease, using either regular rags or one of those new magic dusters to which particles cling. Because the latter option can be expensive, a regular rag can be made just as effective if dampened before use and shaken out frequently.

It’s funny how the exploratory process can affect you. As I sit at my computer, I’m very aware that between the keys of the keyboard is a lot of trapped dust. Are the raccoons soon to follow?

Bill Primavera is a Realtor® associated with William Raveis Real Estate and Founder of Primavera Public Relations, Inc. (www.PrimaveraPR.com). His real estate site is www.PrimaveraRealEstate.com, and his blog iswww.TheHomeGuru.com. To engage the services of The Home Guru to market your home for sale, call (914) 522-2076.