Keeping the Biters at Bay: Creative Tips for Defeating Mosquitos Vines Can Hide a Multitude of Sins … Or Take Over

Feng Shui’ed Anew, Not Without Some Trepidation 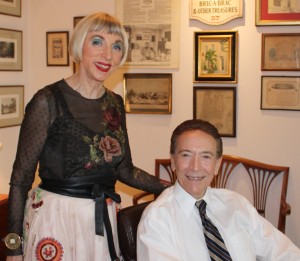 After a year of great upheaval in my personal and professional domains, having moved to a new residence and expanded my space in my office building, I was feeling off kilter everywhere, a little uncomfortable in my own skin, not sleeping well at home and working in a tangle of misplaced folders, temporary filing boxes and a jumble of crossed wires.

Six months ago, I moved from my large historic property that for over 40 years had housed my public relations business and domicile to make way for an ever expanding enterprise after my wife had declared, “Enough! I’ve lived ‘above the store’ my entire married life and now I’m living ‘INSIDE’ the store!” That’s when we purchased a new residence at Trump Park in Shrub Oak which we’ve been decorating madly while at our historic property, we converted our former living quarters into new offices.

The transition has involved a massive displacement of furnishings and fixtures as well as the addition of new office equipment to accommodate a doubling of staff, all of which had left me in a state of anxiety. Perhaps it was not totally accidental that I received a call from the fabulous Deanna Trust, feng shui consultant extraordinaire about whom I had done a column a while back. Yes! That’s it, I thought. The universe has responded to my need to be feng shui’ed both at home and the office to make sure that I hadn’t bollixed up my environments with all this moving about!

“Come visit me fast, at both places,” I implored, “I need to get organized for a feeling of calm.” Within the month (her schedule is tight counseling many celebrities whom she normally keeps confidential, but one she let slip is the entertainer Usher), she arrived, and I had my video production crew on hand to record the process. There was one snag which I hadn’t anticipated: my wife Margaret.

I should explain that a happy marriage of near half a century can be built on the attraction of opposites, and my wife just doesn’t go for this kind of stuff. When Deanna mentioned on the phone just the night before that she would be bringing with her many crystals to “paste to the ceiling” of our new home to energize it, I was able to say with full confidence that, knowing my wife, that wasn’t going to happen. We agreed that we could work around this issue and I promised that at my office, she could plaster the entire ceiling with crystals, like stalactites in a cave, if she liked.

At my residence, as soon as Deanna entered the front door, she told me that the house was “stable, a happy place, well designed for good fortune and happiness.” “Whew,” I said, “Donald Trump will be very happy to hear that!” While Trump didn’t actually build the building – that honor goes to Louis Cappelli who has built the White Plains skyline, Trump did attach his name to it and since he has a feng shui consultant for every one of his projects, I’m sure he wouldn’t have allowed that unless he were fully confident that the place represented him well.

Deanna cleansed and blessed my home in quick order, feeling that I had pretty much followed pointers she had given me from a consultation a year before at a class I attended at that time. I had made some errors in my bedroom with too much “water” representation in my paintings of seascapes – six of them – which all have to go in favor of “action” representation. There were other minor tweaks here and there, like having plants in two corners to stimulate good fortune and growth, but nothing that Margaret would consider too weird.

It was then on to the office building where I admitted unabashedly that I want to soar with success and, my goodness, after a full three hours, I was exhausted. There was the creation of an altar, then the most exacting interpretation of each room from our reception area, to my manager’s office, the others’ offices, conference room, my office, and our kitchen. There was much re-arrangement of wall art, wall color suggestions and a biggie, my office chair, which was not commanding enough it seems: it was suggested that I need a chair which comes up high enough to cover the back of my head, and wouldn’t you know, I had just bought an expensive one that didn’t have that feature.

There were also loads of crystals to be added in every room, some hanging directly from the ceiling, one directly at the entrance, others in corners, and some from chandeliers. Certainly prospective clients may wonder about that and may ask me if I really believe in it all. I’ll tell them, what the heck, I guess I’m like the people who say they decide to live a good life not knowing whether there’s a heaven or hell, but just in case …

If you feel you want to better your chances at happiness, good fortune and better health, call Deanna Trust at (973) 366-3570 or visit her online at www.trustfengshui.com.