What If We Don’t Like What Neighbors Put on Their Properties? When Homes Came in a Big Box From Sears, Ready to Assemble

Fixtures, Getting Weird About What Stays and What Goes 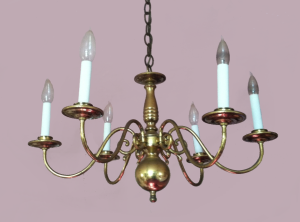 Buyers and sellers who seem perfectly nice and normal throughout the sales transaction can suddenly lose their cool when the seller asks at the last minute that a modest chandelier over a kitchen table be excluded among the fixtures included in the sale.

“Oh no, you don’t,” the buyer might say, “it wasn’t excluded in the listing!”

And, the fight begins. This very scenario happened to me a short while ago. The seller had forgotten to discuss the chandelier’s exclusion with his listing agent on the listing. It was a very ordinary fixture, surely one not worth fighting about.

“But we bought it early on in our marriage, the seller protested to his agent. “Our family gathered under it every morning at breakfast, every night at dinner,” he was reported to have said, and so it went. But my buyer didn’t relent. I appealed to his better judgment. “That chandelier is an inexpensive Tiffany reproduction,” I argued, “and couldn’t have cost more than $100. I’ll buy one that’s more than twice its quality as a closing gift for you,” I said. “No, I want that one,” he said.

It looked as though it was going to come to a showdown. Just prior to this incident I had heard a story about how the sale of a home was lost because the seller had changed her mind about leaving her washer and dryer with a house because those particular models, with which she had fallen in love, literally, had been discontinued and she didn’t want to risk her emotional health with trying another brand.

Oh, my goodness, I declared, you’re going to risk losing a house over a matter like a cheap kitchen chandelier? See reason here, I admonished the buyer. Sanity finally prevailed and the seller was allowed to keep the fixture to which he was so strongly attached.

Shortly after that experience, I was involved with another dispute, and you guessed it, it also involved lighting fixtures, this time in a gorgeous historic home when the seller had affixed the highest-grade wall sconces and chandeliers you could imagine in every room, all quite appropriate to their 18th century surroundings. My buyers oohed and aahed over every one of them in every room. Only after they decided to make an offer after the first showing did I make the inquiry of the seller (it was one of those hybrid kind of FISBOs where the seller does most of the work, but the listing is on the MLS system) about exclusions and, sure enough, the lighting fixtures were “available for sale.” My buyers were not happy and neither was I.

Give yourself a test. Which of the following items would normally not be included as fixtures in the sale of a home: built-in stereo system, electric garage door opener, wall-to-wall carpet, built-in microwave oven, water heater, dishwasher, built-in stove, drapes, refrigerator, washer and dryer. You are correct if you answered that the last four items are not included. All the other items are automatically included since they are attached and have become fixtures.

The literature on the subject is somewhat simplistic. For instance, lumber sitting by the side of a house is personal property because it is not permanently attached to the structure or the land, and is therefore not included in a home’s sale price; however, when that lumber is nailed or bolted together to become a fence, the wood fence is a fixture attached to the land and is included in the sale.

Oddly, while the examples I gave about chandeliers would identify them as fixtures, their light bulbs are not permanently attached to the structure so they remain personal property. Very few sellers remove their light bulbs from the light fixtures (as they are entitled to do) unless it’s a particularly contentious sale. (Although, when I sold my first home, I ended up hating my buyer so much that I removed every light bulb from the house and every roll of toilet paper from the bathrooms. Hopefully, I’ve matured since those early years.) If a home seller wants to exclude a fixture from the sale, it must be specifically itemized and excluded in the sales contract.

When a dispute arises whether or not an item is included in a home sale, it is accepted practice that courts favor (a) buyer over seller, (b) tenant over landlord and (c) lender over borrower.

Well, I guess we all know where we stand in such battles.