Home Guru Musings on Bathroom Oddities, Manners and Etiquette Itching for My First “Project” in Years, and Opting for Quick and Easy

Getting Locked Out, Locked Up, and Locked In 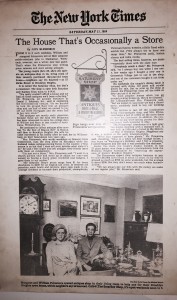 Blow-up clipping of a New York Times article about Margaret and Bill Primavera, discovered in a trunk, forgotten and locked away for over 45 years in The Home Guru’s attic.

With my recent move, I learned that hanging on to keys and identifying which key is for which lock is important because it was necessary for me to call my local Locksmith-on-Wheels in Yorktown Heights, owned by Eugene and Carl Camia, to open two locked file cabinets with long lost keys.

And there was also an unexpected mystery that unfolded before me. Buried deep in the eaves of my attic was a footlocker that I had placed there over 43 years ago when I moved into the house and totally forgot about. It was an item my parents had purchased for me when I was 13 years old and being shipped off to military school. It was to hold all my clothes and other possessions for that experience. Afterwards, as an adult, I used it for moving from one place to another and storage. As I lugged it from its hiding place, I found that it was locked, extremely heavy, and had no key. I had no earthy idea what might be in it. My wife guessed that it might be cobblestones, remembering that I used to collect interesting stones for walkways and patios. “Oh, right,” I said, “that makes sense, that I’m going to save stones under lock and key.”

On that fateful day for the unveiling of its secret contents, I called together my staff for a “happening” much like that famous non-event that Geraldo Rivera staged for the opening of the Al Capone vaults in Chicago. I didn’t remember any skeletons, figuratively speaking, from my past. When the trunk lid was slowly opened, we found only dense stacks of newspapers, periodicals and manuscripts — packed tight, much like the famous hoarder Collyer brothers — dating from 1962 to 1968, obviously the latter year being the date the trunk was closed and locked. I quickly realized that this was my public relations “clipping file” — every publicity placement I made from the beginning of my career, including a blowup of a New York Times clip of my wife and me from our own 15 minutes of fame that had gone missing, I thought, forever. I had forgotten how much space was required before paperless storage. But I digress.

The experience did give me the opportunity to think about the importance of keys and locks and to meet Carl Camia who told me that his call for lost keys has greatly decreased since the age of keypunch locks and automatic openers. All I have to do now, for instance, is stand near my car with my key in my pocket and my car door opens automatically. Then I just push a button to start it without a key.

Carl told me something interesting, even a little frightening, about home security among us people who move from more urban locations where we usually have more than one deadbolt lock. We want the same thing here in the country, and when we do, it can be a dangerous thing in case of a fire. “If a fire breaks out in a house and the second deadbolt lock is in place, the homeowners can panic and not be able to find the key and not be able to get out of the house. It’s happened,” he said.

Locksmithing has always been about keeping us secure and others from stealing our possessions. It began nearly 4000 years ago in Assyria with the wooden pin lock. Although those locks are the most primitive examples of the trade, they were actually the basis for the modern tumbler locks today. Combination locks and padlocks were also used in antiquity, with the earliest examples found in ancient Roman sites. Wealthy landowners and nobles used wooden lockboxes to store and protect their valuables from thieves. At that time, locks were hand-crafted and costly to produce. In Roman culture, citizens used keys as rings to keep them safe from theft.

Through the years, locks became wood/metal hybrids, but around 900 AD, they became all-metal, typically made of brass and iron, making them exclusive to blacksmiths, thus the title of Locksmith was born.

The industrial revolution drastically changed locksmithing, with machines making it possible for advanced components to be produced with ease. In the United Kingdom, Robert Barron’s Double-Acting Tumbler introduced the five lever system, and Jeremiah Chubbs’ Detector Lock utilized automatic jamming mechanisms, inspired by demand for a new lock by the British government in 1818. Barron’s design is one of the few that is still used today.

The most commonly used lock now is the Double-Acting Pin Tumbler Lock, modeled after the wooden locks of Assyria. It was first patented by American physician Abraham Stansbury in 1805 and later modernized by Linus Yale of Connecticut in 1848. In the early 20th century, Hungarian immigrant John Junkunc revolutionized the craft with his dial combination locks and went on to make American Lock Company one of the biggest manufacturers of locks in the nation. Since then, locksmiths have gone on to add features ranging from magnets to electronic sensors and digital keys.

If you get locked out, or something you want gets locked in, or if you move into a new house, absolutely be sure to change the lock for obvious reasons and call Locksmiths-on-Wheels at 914-245-0048

Bill Primavera is a Realtor® associated with William Raveis Real Estate and Founder of Primavera Public Relations, Inc., the longest running public relations agency in Westchester (www.PrimaveraPR.com), specializing in lifestyles, real estate and development. His real estate site is: www.PrimaveraRealEstate.com and his blog is: www.TheHomeGuru.com. To engage the services of Bill Primavera and his team to market your home for sale, call 914-522-2076.