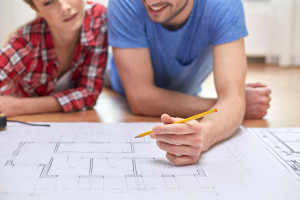 The most interesting aspect of my recent move to a new residence was the discovery of an old footlocker in the attic that had been locked up for 45 years and never opened. In fact, I had even lost the key and had to ask a locksmith to come open it.

Its contents, which I had truly forgotten over the years, were all the clippings, magazines and newspapers where I had achieved public relations placements in my early career. And, most fascinating among those findings were clippings about a major housing study that I was assigned to promote.  (Who knew that I was involved in real estate all those years before I became a Realtor?).

The study was conducted by the design firm founded by that greatest of all industrial designers Raymond Loewy and its objective was to determine the preferences of men and women in choosing housing and the differences between the sexes in what they sought in a home.   It was sponsored by a consortium of manufacturers of housing materials.

The study seems to have had impact enough to warrant significant attention by both The New York Times and Time Magazine.  In combing through the information provided, I found that much has changed in almost half a century, while some things remained constant.

The national survey was one of the most comprehensive of its type until that time involving 2500 personal interviews with respondents in their own homes and, for new home prospects, the interviews were conducted before, during and after visits to different types of properties and model homes.

It was the first major study to analyze the difference between men and women in the way they regard homes and housing. When the interviews were conducted at model homes, it was found that the homes failed to fulfill the expectations and desires of would be purchasers, but for different reasons.  Women registered greater general disappointment than men. They were most disappointed in the ability of the home to meet their standards for childrens’ care and upbringing.

Remember, this was 50 years ago, before we had open floor plans.  In those days, kitchens were walled-off almost as though they were undesirable places to be encountered.  In the intervening years, kitchens have opened to dining rooms, family rooms and/or playrooms where mothers and children at play can interact very easily.

Men, on the other hand, saw the new dwelling as failing to serve the major masculine needs, identified at that time as ways to express individuality, protection of personal privacy and the display of possessions and the family itself.  Women’s discontent was directed at particular rooms and functions of these rooms in the home – the kitchen, entrance, and recreation room, while men reacted to specific features of a home and were more permissive of many general faults

Findings showed the point of greatest husband-wife agreement about housing occurred at the earliest stages of married life and family formation, and that the agreement diverged significantly as the family matures.

Divergent as their motivations may have been when considering such factors as children, individuality, use of time, investment, possessions and socializing in relation to housing choice, it was concluded that to buy housing, husbands and wives must come to reasonable agreement about what they want.  This agreement, it was found, gave greatest weight to children, privacy and convenience.  The concern for children, their health, security, social and educational opportunities, came first with both men and women until their family had grown and left home.

The area of the study that has probably most changed is the psychology of home buying. At that time, it was concluded that women were more practical about housing, while males tended to fantasize more romantically, imagining a dwelling that may have been less satisfactory than they imagined.

Another area that may have changed was the selection of favorite rooms in the house by female and male.  Fifty years ago, men were more favorably impressed by the foyer and kitchen, while women were not.  At the time, men were found to regard the entrance foyer for the first impression it gives to visitors who would transfer a favorable impression to males as host and homeowner.

There was general agreement between the sexes, however, in the living room and master bedroom/bath combination.

At that time, women associated the kitchen with being more isolated and detached from family and guests, a sort of Siberia, while their preference for the master bedroom was a symbol of marriage security where they could retreat when they wanted to be alone.  It was also the room where they saw themselves as “pampered and desirable.”

One of the not-so-startling conclusions of the study was that the purchase of a house was seen as a matriarchal move.  When the husband decided to buy a house, the study noted, it is probably for the sake of his wife and children.

Probably the major change is in favorite rooms:  surely the kitchen many times “sells” the house of today, particularly for women and, as for men, they have fared pretty well in having their own space for individuality when you consider that the term “man’s cave” hadn’t even been thought of half a century ago.