In a Political Season, Equal Time for Red and Blue 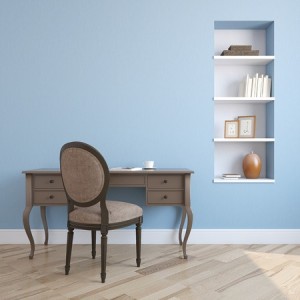 Recently when I wrote a column dedicated to decorating in red, I received a comment from a reader asking whether my personal devotion to the color was politically motivated, but honestly, the thought never entered my mind. However, I thought that it was certainly a creative association.

When it was suggested by that same reader that I should give equal and unbiased time to the color blue, I thought it only fair, considering that some surveys have identified blue as America’s favorite color and at the same time, the latest polls show that a greater number of Americans identify with the political party that has adopted blue as its color.

Interestingly enough, red and blue have not distinguished the two major political parties for as long as we might expect. It wasn’t until the epic, drawn-out 2000 election of Bush V. Gore that color coded maps were standardized to identify Republicans with red and Democrats with blue.

Psychologically, color is credited with influencing our moods, eating habits, sleeping routines, even our romantic inclinations. And, the colors we choose in decorating can have a major impact on day to day living.

I had never thought about a strong color themed décor until, early in our married life, my wife and I met Myrna and Harry, another young couple who lived in the same apartment complex as we. Myrna was an art teacher and her favorite color was blue. In her own artwork, she painted in oil, and every painting was a study in various shades of the color. All of the walls in her apartment were stark white and all of her upholstery and window treatments, while simple, were blue.

It all made a definite statement, but was definitely not for me. I was deeply entrenched in warm colors in my early years, as was my wife, and our surroundings reflected it, from creamy off-whites and yellows for the walls to rich reds and browns for the decor. But according to a survey by House Beautiful, we’re in the minority. In the magazine’s Color Report, 29 percent of 4,000 respondents nationwide chose blue as their overall favorite color. A close second, at 21 percent, was green (my second least favorite color) while red and purple lagged behind, tied at 8 percent (again, weirdo me would choose these as favorite colors).

Giving blue its due for those who love it, it’s all around us in nature from the sky to the water. Known for its peaceful quality, blue is a favored color for bedrooms. Studies have shown that it actually slows down the metabolism, so it would make sense that it could help induce sleep. Blue is also very useful as the principle decorating color in a business setting, particularly meeting rooms designated for negotiation and keeping “cool” heads.

Blue also conveys a certain royalty or being set apart (as in “blue bloods”), as well as authority or confidence (as in “Big Blue”). Blue can be associated with isolation which might explain why someone feeling lonely could be said to have “the blues.” But in the final analysis, it all depends on how we relate to blue individually.

The “power” suit for men has always been a navy blue, while for women have adopted red to convey the same message of authority. But as for the man’s tie, red will always trump (to coin a phrase) blue in claiming the adjective “power.”

When it comes time to decorating, blue actually offers more variety and latitude than red. A little red goes a long way and can easily be overdone and actually overwhelm the occupants of a room with too heavy a hand. In my “red” column I related the story about my disastrous first decorating job as a teenager when I painted my bedroom blood red (make that dried blood red). When the house was put on the market, the first prospects walked into that room and uttered, “wow!” It would be difficult to overdo with blue no matter how extensively used. I once decorated a family room with a wildly busy paisley wallpaper trimmed with a bright blue woodwork and got away with it.

Having just transitioned from a living room that was predominantly pink and red to one that is primarily blue, I suppose it might be a change of life thing. My pace is a little calmer, a little more peaceful and my surroundings are falling in line.

But wait a minute. Here I am, preferring red but choosing blue to decorate. Is it to keep people guessing about my political leanings?