Is Your Ceiling Height a Trip for Alice in Wonderland? 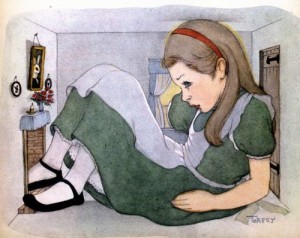 Alice in Wonderland had to eat from a magic mushroom to accommodate the ceiling height in the rabbit’s home.

Many years ago when my wife and I discovered our dream home in the country, we were delighted that we could figure out a way to turn a one-and one half story saltbox wing with all original 18th century details into a separate apartment. It was and still is the most charming rental unit, we’re convinced, in all of Westchester.

However, it came with one caveat. Whenever it was available for rent and we received inquiries from prospective tenants, the first thing my wife would ask was, “Do you mind telling me how tall you are?”

There was always a questioning pause on the other end of the line, but if the answer was 6’2” or over, her response was, “Sorry, I don’t think this apartment would be for you.” The reason was simple to explain. The structure was built in 1734 when people were shorter, and the ceilings on both floors are barely two inches more than that in height.

We didn’t want to waste any very tall person’s time in considering a home where they might feel like Gulliver visiting Lilliput or Alice in Wonderland inside the rabbit’s house.

In those early days, most houses were simple utilitarian structures and home builders knew that lesser heights meant less space to heat in the winter and therefore less wood chopping to fit into a day bursting with physical activity as it was.

My house belonged to a tenant farmer on the Van Cortlandt land grant and his needs were quite simple, but down the road a way at the landlord’s Van Cortlandt Manor, greater affluence afforded ceilings with greater height. The same holds true today.

While ceiling heights in Victorian times had reached average heights of 13 feet, based on English city houses, heights moderated down to eight feet with the advent of mass housing developments after World War II. That height, based on the standardized length of an eight foot stud, stayed in place until the term McMansion was coined in the early 1980s where center halls and family rooms could soar two stories high.

By the end of the 20th century, increased fuel costs put a damper on ceiling heights so that today the average ceiling height for new construction is nine feet on the first floor and eight feet on the second. That extra foot in height on the first floor, it is estimated, can increase the cost of building a home from $20,000 to $30,000, for a 4,000 sq. ft. house, depending on the area of the country in which it is built. And to keep everything in proper scale, a higher ceiling means that furniture might have to be larger, windows have to be taller, crown molding has to be thicker, a fireplace mantel must be taller, light fixtures bigger and even artwork has to be larger to cover more wall space.

What mitigates the extra expense of taller ceilings is the cost savings that come from better insulation and other energy saving improvements to windows and doors.

My friend, architect Michael Piccirillo, who designs many upscale homes in the region, commented on ceiling height trends today as follows: “In the past, homes were built with what we call a “balloon frame” where studs go from grade level to roof, as opposed to the “platform frame” we use today where each floor’s studs make their own separate box and one box is placed upon the other. With a balloon frame, ceilings could be any height, but as the milling of studs was standardized to eight feet in the early 20th century, ceiling heights were almost universally that same measurement.

“A comfortable ceiling height today depends on who you talk to. Affluent clients are asking for a nine foot minimum ceiling height, but prefer 10 or even 12 foot ceilings. Anything less than that is unacceptable to the people who do not have to be concerned with utility costs. But, interestingly, new zoning regulations keep even the wealthiest clients from going overboard in that the overall building height is limited in our communities, which in turn limits the height to which we can build ceilings.”

Beyond cost, another factor to consider is the psychology of it all. Pulte Homes, one of the nation’s largest homebuilders, conducted research recently demonstrating that, while consumers like higher ceilings to have a room feel more expansive, they feel that it gives a greater sense of formality to the space, which can render it cold and austere.

But today, besides an open floor plan, we want homes that are more inviting, casual and warm. And, part of achieving that is with ceilings that are more humanly scaled. So if you’re a house-hunter, consider carefully the space between your head and the ceiling, because it can’t be changed easily, unless you partake of Alice’s magic mushroom!