Selecting Flooring that’s Easier on the Body Observations About That Essential Fixture, the Toilet

Joy and Labor of Water on Landlocked Property 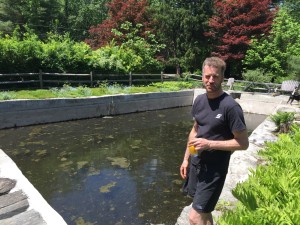 Matt in the process of draining the nearly 100-year old spring-fed pool on the property he and his mother Rebecca restored in Carmel.

For those of us who are not lucky enough to have a home on a lake or pond, or one with a river view, there are other ways to enjoy the soothing effects of water, even if we’re landlocked.

It could be as simple as a classic fountain which I’ve enjoyed for many years on my back patio, spewing water from a pump into an upper basin, overflowing into a lower pan with a wonderful splashing sound that dampens occasional noise from the street. Our second opportunity for the sound of water presented itself when we installed an in-ground pool and designed a waterfall to go with it, adding to the pleasure and relaxation of our outdoor experience.

Through the years, many of our friends ventured into the creation of different water features on their properties, from small koi ponds built on their own at minimal expense to elaborate systems designed and installed by professional landscape architects, incorporating a meandering stream and waterfall. No matter the level of commitment, there is a certain lure of water in the garden with proven psychological benefits to the mind and spirit.

Even a marine biologist, Wallace J. Nichols, writing in the Huffington Post, weighs in with the thought that being near water triggers what he calls a “blue mind” — as he puts it, “a mildly meditative state characterized by calm, peacefulness, unity, and a sense of general happiness and satisfaction with life in the moment.”

No matter how simple or elaborate a water feature is planned for one’s property, there are the operational and maintenance factors that should be considered in advance, because they can be considerable.

Just this summer, I encountered the most awesome example of a do-it-yourself water project with the spring-fed pool project of Rebecca and Matt, who asked that I use only their first names.. In 2008, Rebecca bought a 100-year old home in Carmel a short distance from the West Branch Reservoir and found on the deed that there was an “abandoned” natural spring-fed pool on the property.

“It had long ago been filled in and all you could see was the large, oblong outline of rocks on the ground, covered by poison ivy,” Rebecca said. “I particularly remember the poison ivy. I asked my contractor who built the garage and my landscaper who built my walls whether it might be worth the effort to dig up and restore the pool, and they both said, forget it! It was probably good advice. But when I asked my brother, a geologist, he simply said, ‘Oh, sure! All you have to do is dig it out!’”

Taking his advice, Rebecca and Matt went through a long planning process, trying to figure out ways to divert the stream and how to install a series of sump wells to dry out the mud that filled the pool so that it could be dug out. There were endless challenges but they were confident they could get the job done.

It was a formidable job with much trial and error. As they began the dig of the large 38’ x 52’ form, they discovered surprises along the way, such as steep steps at one end. When they finally reached the bottom, they found large broken up slabs of concrete. But rather than pour a new bottom of concrete, which could break up again because it was below the water table, they created a natural bottom with tough fabric used for in-ground swimming pools and covered it with round stones, and it worked.

They added a sediment trap at the point where the stream flows into the pool, which needs to be emptied periodically. A major chore is draining the pool each year which involves removing an expansion plug at its bottom which can take a full day of hard work with a crow bar and brute strength. Overall maintenance is a formidable responsibility.

“Sometimes I wonder if I should have taken my brother’s advice when he said, ‘just do it,’” Rebecca said. But recently when Matt posted photos on Facebook of the pool restored for the season, with Rebecca enjoying a refreshing swim, it seemed to the observer to be well worth the effort.

As for me, I’ll have much greater respect for the owners the next time I encounter a listing that features a “spring-fed pool” by which to relax. And, I’ll be more grateful that I have a trusty pool service to maintain my Sylvan pool, fed by my municipal water supply.