Oh, Lord, If Today Is Moving Day, Just Shoot Me Now The Home Guru’s Predictions on the Market and Trends for 2015 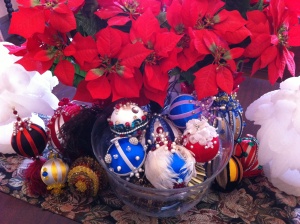 A sampling of handmade Christmas tree ornaments created by Mr. and Mrs. Home Guru from their first Christmas together, almost half a century ago.

Christmas has always been an important holiday to my wife Margaret and me. Never did we think, that after so many years of being ensconced in the same house where year after year we decorated our tree in the same living room in the same corner with the same decorations, that we would be moving the week before Christmas. We wanted to uphold the tradition of having a tree but hadn’t even half unpacked.

However, inveterate holiday revelers that we are, we committed to having a traditional Christmas Eve family celebration with a decorated tree as always no matter what. Last week, as the movers were unloading boxes from their truck, I spotted that battered six-foot-long oblong box that I’ve re-taped for years and retrieved it before it was transported to storage.

So here we are with all our linens still packed in boxes in the front hall and our pots and pans in similar straits on the kitchen floor, but the very first item to be released from the bounds of its cardboard restraints is that faker-than-fake greenery that somehow springs to life every year with the help of sparkling lights and handmade ornaments.

I dragged the box to the Palladian-like window at the end of our fifth-story great room and plopped it down. Like a 10-year-old child eager to open his first gift, I ripped open the box and pulled out the stand with its spindly legs, which I’m always convinced will never hold the tree steadily enough. Then came the bottom bulkier section of greenery, then the diminished third section, followed by the slimmer second portion and finally the top that brings the tree to a point.

I fluffed out the branches, plugged in the lights and, naturally, another string of them had died during the hot summer months. Margaret supplied another three sets of 100 each to fill in the dead spaces but even one of those didn’t work.

A day later and after another exchange, the tree is fully bright once again as I tangle the new lights with the old, then together we start the yearly ritual of unwrapping the handmade ornaments made from Styrofoam balls covered with fancy ribbons, beads, pearls, rhinestones, feathers, buttons and all kinds of ingenious materials we gathered from Manhattan’s hat district.

Our original plan was to make one elaborate tree ornament each year throughout our marriage, but we got so much into our new hobby when we first married that it became an obsession the first year. The balls became more and more elaborate as we practiced our skills, many with themes and their own names.

One ball, completely covered in pink ribbon ruching, was named our Baby Girl ball, even though we didn’t have a baby yet. There was the Grace Kelly ball with pale blue and yellow ribbons and pearls; the Swan Lake ball with white ribbons, white feathers and crystals; the Can-Can Girl ball with black and red ribbons, beads and a black feather plume on top; and our real piece de resistance, a large Faberge ball with semiprecious gems taken from old pieces of jewelry.

The tips of our thumbs had developed calluses from pushing in the pins until we got smart and used thimbles to aid our obsession.

We decided it would be safer to buy a large artificial tree so that there would be no threat of sap staining the balls. We kept producing our little gems until we ran out of space on the tree. We had become Christmas ball addicts.

Since our first year’s attempt we haven’t made a single ball since. I guess that’s the kind of stuff newly-married couples do together, projects that can be appreciated later in life when there’s time to do so. And, come what may, including living out of boxes during a downsizing move, we’ve never celebrated a holiday without both appreciating and showing off our collection from that first year of our half-century of connubial bliss.

And for my Jewish friends, I just found out about a couple who has collected hundreds of dreidels for Hanukkah, so I know my wife and I are not alone in this passion for collections associated with the holidays.

Bill Primavera is a Realtor® associated with William Raveis Real Estate and Founder of Primavera Public Relations, Inc., the longest running public relations agency in Westchester (www.PrimaveraPR.com), specializing in lifestyles, real estate and development. His real estate site is: www.PrimaveraRealEstate.com and his blog is: www.TheHomeGuru.com.  To engage the services of Bill Primavera and his team to market your home for sale, call 914-522-2076.