A Little Secret in One of Our Most Interesting Cities: Peekskill A Herald of Angels Behind Housing “Freedom” for the Disabled

Living ‘Over the Store’ at Home: When It’s Good, and Not 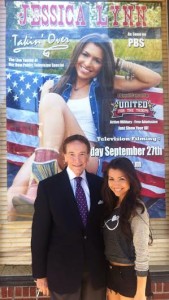 Bill Primavera, The Home Guru, with Jessica Lynn, country singer and songwriter, appearing September 27 at the Paramount in Peekskill. Both their businesses are home-based. The Home Guru is a sponsor of the event. Photo Credit: Primavera Public Relations

Would you believe that 52 percent of American companies operate as home businesses, according to the U.S. Small Business Administration? My wife and I have occupied that category almost from the day we were married and perhaps, at least on my side of the family, it was ordained.

I was fascinated when as a child my mother told me that my paternal grandfather had been a soda bottler in Philadelphia, and more interestingly, that his bottled sarsaparilla was delivered to and stocked by the corner store owned by the father of the wildly popular singer at the time, Mario Lanza. When I asked where the bottling plant was located, I was astonished to learn that it was based in the basement of my grandfather’s row home, and further, that the returned bottles were hand scrubbed with round brushes by his first wife (“who literally worked herself to death,” my mother said) and all of her 18 children who had survived childbirth and were old enough to work.

My stay-at-home mother, who had a bent toward the dramatic, left me with a horrible impression of an at-home business as dark and dangerous, even draconian, and I was grateful that my family lived simply in a one-story ranch with no industry going on around or beneath us that required my slaving away after school. However, once married and ensconced in my first home in the city which happened to have a ready-made antiques shop on the first floor, I seemed to become obsessed by a demon, perhaps the spirit of my grandfather, to succeed in my own business located within my own home. And when I moved to the country, I intentionally looked for an old historic home that was three times the size I needed to accommodate both a special use permit and a business du jour.

Over the years that space has hosted in succession and sometimes concurrently a failed antiques store, a very successful nursery school, a short-lived weight loss club, a shorter-lived gourmet society, an exhausting New York State packaged foods operation, and from 1980 to the present, the longest running public relations firm in the Hudson Valley, combined in the past six months with the office for The Home Guru Team of William Raveis Real Estate.

Lately there have been rumblings from the distaff side of my wonderful marital relationship. “I’ve lived my home life ‘above the store’ practically since Day One of my marriage,” says my wife Margaret, “and there has always been something going on other than our daily living routine. It would be nice to see how other people live for a while!”

Lately the two businesses I run from my home base have both experienced a significant growth spurt that is literally forcing us out of our home and into new and beautiful quarters with less square footage where, as I understand it, the bylaws do not allow me to set up shop of any kind. At last I’ll know how “other people” live.

But, as stated earlier, I’ll be in the minority, just as with my newest public relations client, Jessica Lynn, the country singing and songwriting star who grew up in a home in Yorktown Heights that was basically a rehearsal hall and recording studio. “From my earliest memory, I was surrounded by music from my mom who was a singer and my dad a bass player. My younger sister, parents and I lived in a three bedroom ranch, but one of the bedrooms was set aside as our recording studio,” she says. “Even though I went to college and received my master’s in math and also studied special ed, there was never any question that I would pursue music. It was just always there and obviously it influenced who I became and what I do.”

As I plan to move, I take comfort knowing that I’ll be living in new, beautiful surroundings and care-free comfort, and that eases the pain a bit. Also, my grandfather could never have telecommuted like I can. But still, there is much reluctance as I say goodbye to living “above the store.” I guess I’m an incurable merchant and just love hearing that cash register ring close by, anytime during the day or night. I await with wonderment discovering what “normal home life” is like.