Streaks and Moss on the Roof? How About a “Roof Shampoo?” Snapshot in Time: Housing Inventory, Sales and Mortgages

Living with Ghosts: To Disclose or Is Mum the Word? 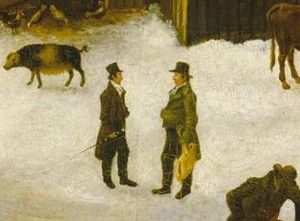 Jacob Hicks, on right, chatting with Thos. W. Birdsall in a detail from Francis Guy’s “Winter Scene in Brooklyn.”

Only after years of writing about homes and what happens in them do I feel confident enough about how readers may regard me to tell a spooky story that I repeatedly placed on the back burner for fear that I would be perceived as a nut job. Halloween is as good a time as ever to tell it.

It’s a story about whether the energies of deceased souls stay within a house after their physical presence is no longer there. In other words, are there ghosts living among us?

According to a recent Huffington Post/YouGov poll, more than 45 percent of the population believes in ghosts or that the spirits of dead people can come back in certain places and situations. In another poll by Associated Press a while back, 23 percent reported that they have actually seen ghosts or felt their presence in a room.

One associate told me that she sometimes hears her deceased husband breathing next to her when she is in bed. One of my sellers told me that her mother’s spirit still resides in a house I have listed, but I was already strongly aware of that.

The weirdest experience of all happened just the other day in Panera Bread when I stopped by to get my fix of acai berry tea and do some writing on my iPad. There I saw a former client whose historic home I had listed a couple of years ago. As she was leaving, she stopped at my table and told me that she must share with me a series of strange incidents that happened to a new tenant in her home’s rental unit. On three separate occasions, a light fixture from the ceiling had fallen when the tenant was standing under it, and in three different rooms.

Isn’t it strange that she would have shared this story with me without knowing that I was writing about the subject? I told my friend she should definitely look into the history of the house to see if she can determine what negative energy might be having such a reaction to her tenant.

Here’s my true story that happened when my wife and I bought our former home, an historic house in Brooklyn Heights, built in 1826. We felt it was an ideal investment property because we wanted to sell antiques and the house had an already established antiques shop on the first floor, an apartment for us on the second floor, and a duplex apartment on the two floors above that for rental income.

We didn’t meet our newly acquired tenants, Helen and Lou, until we took up residency, but when we did, the first thing Helen asked was, “Did Terry (the former owner) tell you that the house is haunted?” In response my wife and I exchanged glances of alarm that we were sharing the premises with a crazy women. However, we were proved wrong.

Skeptics may scoff at this report of paranormal activity in the house during the five year period that we lived there, but it can be corroborated both by my wife and my daughter, who was born in the house.

Some nights we would hear several babies crying at once as though in an echo chamber, when there were no babies in our building or anywhere near us; there would be strange smells, both pleasant and unpleasant, that would suddenly come and just as quickly disappear; there would be footsteps overhead when no one was above us and, in the case of my wife and Helen (but not Lou or me), there was the sensation of an icy hand covering their own hands on the banister of the hall staircase.

After my daughter was born, we became more concerned about the spirits, both seen and unseen, with whom we shared the house. By the time my daughter was two years old, we sometimes could hear her squealing with delight in her room where there was a toddler’s indoor jungle gym with a sliding board. Frequently she would point to the sliding board and say, “Look, look at the boy! Where did he go?” One night before she was about to fall asleep I asked her to tell me about the boy on the sliding board and she was able to report in her carefully formed sentences that “he has long hair like a girl, but he is a boy.” Then she pointed to a mid-19th century Currier and Ives print on her bedroom wall of a young boy with long curls saying his evening prayers and said, “He looks like that!”

The climax of our creepy experiences came to me one day with an apparition when I was alone in the house. It was on Columbus Day when my wife had to work and I didn’t.

I was in the antiques shop vacuuming the floor in preparation for our weekend sale. Above my head were the footsteps pacing back and forth, back and forth, loud enough to override the hum of the vacuum. Annoyed, I remember directing my question to the air, asking, “Who ARE you and what do you want?” Within an instant, a shadowy figure appeared on the other side of the room, slowly coming into sharp focus: a rotund man dressed in 19th century garb, a black suit with a vest and a chain for a pocket watch, and a bowler hat.

I could see the expression on his face, oddly one of surprise as I must have registered in return. Without speaking, I communicated to my visitor, “Whoa, I’m not ready for this!” The visitor then gave me a knowing smile, and I sensed that he responded, “Quite so, quite so,” repeated twice. He then turned and walked right through the wall into the entrance hallway.

A short while after the experience, my wife and I visited the Long Island Historical Society and in its main room was an enormous painting by Francis Guy, a street scene from 1820 showing important citizens from the period. I was surprised to recognize it as a corner just a block from where my house was located. But what astounded me was recognizing the appearance and posture of the man I had seen as an apparition in my house! He was holding a chicken that he had just purchased at the market and was in identical garb as I saw him, with a vest covering a healthy pot belly, shoes with bulbous tips, and a bowler hat. The painting included a legend of the citizens’ identities and, tracing the figure to a name, I squinted to see that it read “Jacob Hicks,” whom I already knew from research was the original owner of my home.

That was just the first coincidence that led me to know that what my family and I were experiencing were not figments of our imagination. I went to the Department of Records in Brooklyn and learned that over a period of 25 years there had been a series of children’s deaths in the Hicks family – 18 of them, all told – either at childbirth or when just a few months old. That to me explains the babies’ cries we frequently heard when there were no babies in our building or nearby. I then felt that I knew the man I saw and the heartbreak he experienced with the loss of his children.

When I sold that “spirited” house as a “for sale by owner” (shame on me now as a realtor), I mentioned nothing about my strange experiences to the buyer. But I was within my right not to. I wasn’t smart enough then to know it, especially representing myself without a realtor, but New York is a “non-disclosure” state where there is no onus on a realtor or homeowner to disclose anything that might be considered a “latent defect,” such as a suicide, break-in robbery or “ghosties” in the night.

For those of you who believe that energy is neither created nor destroyed but only transformed, and that the spirits of the deceased can remain in a house, I’m here to tell you from personal experience that we’re far from alone. If there were no plausibility to such beliefs, there would be no reason for feng shui or internet consultants who claim they can cleanse a house of spirits long distance!  Rest assured that I am the most understanding of realtors whenever a buyer prospect asks, “Has anyone died in this house?”

As for me, I couldn’t swear on a stack of bibles that my imagination hasn’t run wild at times in the old homes I’ve owned and shown to clients, but I know for sure that a certain Jacob Hicks once revealed himself to me to say hello.