Living with Other Noisemakers like Me, Liking or Lumping It 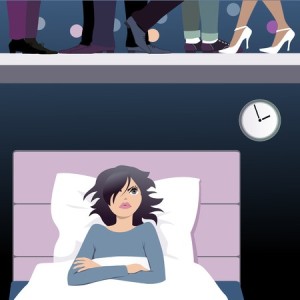 Lately I’ve been made aware that I’m probably a noisy person. Not to myself so much, but maybe to others. More and more, if I’m watching TV in one room and my wife in another, for instance, she’ll say mine is too loud.

And just the other day, when I had driven into my property which houses my PR business and jumped out of the car without turning off the motor to unlock the place for my painters who are redecorating my offices, the realization really struck home. One of the painters who’s worked for me for a long time looked at me askance and said, “Knowing the kind of man you are, I never would have thought you’d play loud music in your car!” I guess I was busted.

Yes, I like loud music, whether in my car or at home. Not rock or country, but Broadway show tunes that get my heart pumping. And it doesn’t do the trick for me with earphones. The sound has to fill the room I’m in and reverberate off the walls to fully embrace me.

For more than forty years I’ve lived on a property with no homes near me, but now that I also own a condo at Trump Residences in Shrub Oak with neighbors across and down the hall, I guess my reverberating days are over if I’m to be a considerate neighbor. Just last week, a gentleman across the hall asked if the piano playing he heard was coming from my unit. Oh, no, I thought! I’m only able to play the American Songbook, and I am so rusty after a 30 year absence from the keyboard that I’m sure Cole Porter and Richard Rodgers are rolling over in their graves.

Sheepishly, I admitted it was I tinkering on the keys and apologized that I’m not a more accomplished musician. Since that time, I haven’t been playing late and have been using the soft pedal when I do.

Most of us who live in Westchester or Putnam Counties have some kind of proximity to a neighbor who is subject to noise we make as we share property lines or walls of apartments or condominiums and that can create problems, sometimes big ones.

When I moved into my first apartment on my own in Brooklyn Heights, it was new, cheap construction and the floor above me had no carpeting. Living there was a single mother who must have worn spiked heels her every waking moment, and she had a child who could only have been possessed by a demon. In the days before cell phones and when everyone had no fear of being listed, I looked up her number and called her so frequently to complain about the noise that I can still remember her name and Triangle exchange to this day. Then, one day, her tough boyfriend came banging on my door, which I refused to open, calling me names, the least offensive of which was “a neurotic,” threatening me serious bodily harm. That’s when I decided to skip out on my lease and leave the building for a more solid pre-war building with a lot more insulation from sound.

When my wife and I married and shared our first apartment in another new building, there was an older gentleman who lived in the apartment right off the lobby who loved to share his life with all the residents of the building. He must have been involved with entertainment in the 1950s, because he would leave his door open and sing songs of that period without accompaniment. Only in New York, right? His favorite was “A White Sport Coat and a Pink Carnation.” Whenever my wife and I want to refer to the intrusion of one person’s lifestyle, aka “noise,” into another’s, all we have to do is sing that song as code and it speaks volumes.

When we moved to the country, the vagaries of close proximity were lessened for sensitive ears and far different. Here in the wide open spaces, we have lawn mowers, leaf blowers and the biggest offender about which most of us complain, barking dogs, that is, if they bark too long unabated. Most towns have in their codes the acceptable length of time an owner can have a dog bark before a neighbor can ask that a warning be issued by the code enforcement officer.

For those of us who share walls in condos or apartments, we have the same issues that those of us in the city would have. The other night at a dinner given by a social club I belong to, I discussed this subject with a fellow member who told me that he shares walls on either side of his unit with other retired people. “I know most things about their lifestyles, he said, like when the nice woman on one side of me can’t sleep and I hear her TV go on in the middle of the night. We just adjust.”

And, failing all else, there are always old-fashioned earplugs.