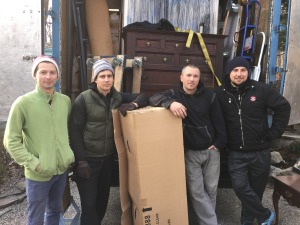 After death of a loved one and divorce, moving is the third greatest stress producer in life. Certainly by this age, I should be able to recognize diversionary tactics when applied to myself, but I failed completely on the very morning that our movers were scheduled to arrive, and there I was at my bathroom mirror with a sudden urge to fashion a new hairstyle for myself.

The night before, weary from packing to the point where I was mixing china with a hammer and a canister vacuum cleaner in the same box, I glanced up at the television and noticed a sportscaster with his hair slicked straight back attractively and wondered how that style might look on me.

After shaving, I tried to duplicate that style by wetting my hair and dousing it with baby oil that must have been in the medicine cabinet since my grown daughter was an infant, and slicking my hair back in the same way as the sportscaster. I then sought out my wife Margaret for an opinion, asking if I might not have taken too much a styling risk. “Does it make me look like Bela Legosi when he played ‘Dracula?’” I asked, trying to cut the tension of the situation upon us.

Far from being amused, Margaret upbraided me, astonished that I was fussing with my hair when we were less than 75 percent packed with the movers fast on our heels. I immediately hopped to the task at hand and tore into the boxes, wrapping paper, and bubble wrap that Phil D’Erasmo of Advantage Moving had left for us in copious amounts the week before.

Our situation was particularly challenging for any mover because not all the contents of our home was to be moved. Only about a third was to go to our new home, one third was staying in our current home and business setting, and the remainder was to be set aside for a big tag sale the week after the move. Picking and choosing what goes where would be enough to drive any homeowner nuts, much less the mover having to conduct such a separation of someone else’s treasures and junk.

When the moving crew from Advantage arrived, a team of four led by a young man named Dmitry Gogin, we apologized for not being quite ready for prime time and promised that we would continue packing alongside them. “No problem,” said Dmitry with great assurance and a big smile. To me, a good attitude in the midst of chaos is worth at least double any tip I had planned in advance.

And, indeed, Dmitry and each of his crew had the patience of saints as I careened from normal to neurotic, back and forth, changing my mind countless times about what stayed and what went. These four stalwarts got to work taping boxes, wrapping china, crystal, stemware, and paintings, protecting upholstered furniture and carting everything from the house to their truck from as far up as the attic, down two flights of steps, up again, down again, repeating the cycle again and again from 7:30 am to 1:30 pm, all the while accommodating my requests to add this or that to the items to be packed. Even after the truck was crammed to the brim and I found yet another chair and end table I had forgotten about that needed to go, Dmitry said, “Fine, we’ll fit them in somehow!” and he did.

At the new residence, the delivery was especially intense because there was a time limit on the part of the building management. We absolutely had to be wrapped up by 4:00 pm. It was like “Beat the Clock.”

Thank goodness the Advantage movers were in their 20s and 30s because only younger joints and sinew could sustain that kind of effort. As for me, after running back and forth between the two residences over forgotten items like paper towels and pillows until 1:00 am, I finally peeled off my clothes at the end of the ordeal, glancing in the mirror for the first time since early morning only to realize that, oh my God, I had spent the entire day in a new and most unbecoming hairstyle that might have given anyone the impression I was able to tell them, “I vaant to suck yer blood.”

If there’s a move in your future, for the best and most compassionate service imaginable, you don’t have to look further than Advantage Moving which can be reached at 800-444-0104.

Bill Primavera is a Realtor® associated with William Raveis Real Estate and Founder of Primavera Public Relations, Inc., the longest running public relations agency in Westchester (www.PrimaveraPR.com), specializing in lifestyles, real estate and development. His real estate site is: www.PrimaveraRealEstate.com and his blog is: www.TheHomeGuru.com. To engage the services of Bill Primavera and his team to market your home for sale, call 914-522-2076.