Vines Can Hide a Multitude of Sins … Or Take Over Surprising Information about Carpets vs. Hard Flooring and Air Quality

How I Added Pizzazz to My Home with Custom Lighting 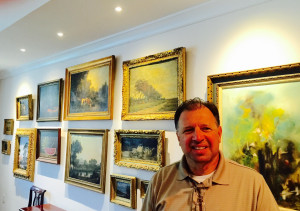 Jimmy of P&K Electric in Yorktown Heights, project manager, and as much an artist as an electrician when installing the dramatic lighting system at The Home Guru’s home.

When I was in college, I appeared in a play called The Madwoman of Chaillot by Jean Giraudoux with the actress Linda Lavin, who would later go on to achieve fame as “Alice” on television. The most stunning thing about that production as I recall was the amazing effects achieved by its lighting director, on staff in the theater department, who was an incredible talent.

I remember that when the curtain rose for the second act, the stage was completely dark and slowly a small pin spotlight illuminated only the face of the madwoman in the center of the stage. Just that lighting effect alone brought applause from the audience. Every scene of the play was an arresting study in shadow and light where brightness drew the viewer’s attention where it needed to be while other areas of the stage receded. I was mesmerized as I observed how light created movement and mood by playing off stationary surfaces.

Many years later I was reminded of my interest in stage lighting when Barry Liebman, director of Yorktown Stage in Yorktown Heights, shared with me his feeling that a production really doesn’t come to life until the lighting director does his job with a show, going so far to say that seeing a set dramatically lit for the first time has brought him to tears.

His saying that convinced me that someday I should have a home where its lighting would be as dramatic as a stage set, and that would require a custom designed lighting system. But, having always lived in antique homes, my lighting was primarily from traditional lamps. When I moved recently to a new condo at Trump Park Residences, however, my dream for dramatic lighting presented itself. I arranged with management to have electrical contractors work with me to install a system to light my great room which I had designed basically as an art gallery for my collection of portraits and landscapes. The lighting system I planned was to highlight the paintings on three walls: portraits on the “living room” side, pastorals on the “dining room” side and a large abstract on the third wall in between.

At first I was planning to hire a lighting designer, but I was lucky to find an electrician with sensitivity to my ideas and needs, P&K Electric – a father (Pete) and son (Ken) team in Yorktown Heights – and working in tandem with an electric supply company, Mid-County Lighting & Electric in Mahopac, we all worked wonders together.

There were many technical challenges to overcome working on a top fifth floor condo with 10-foot high ceilings, installing high hats in a soffit with insulation material. The casing for the high hat units I originally wanted turned out to be too large to be accommodated in the soffit, but I had the good fortune to be assigned a job manager named Jimmy who was as much an artist as he was an electrician. Jimmy guided me every step of the way in terms of which product to use – we sourced a small LED light at Mid-County whose imprint on the ceiling is only two inches square – as well as the appropriate spacing and angles of light to employ. And, he cut such clean holes that nary a speck of spackle was needed for patching the plasterboard.

Now completed, the overhead pin spots illuminate my great room/gallery in a warm and inviting way. Rather than being surrounded by flat walls with two-dimensional shapes on them, the lighted paintings create great depth and richness to our space. While we have other traditional lighting sources in the room, it really requires no light other than that resting on the faces of the portraits and on the landscapes of the pastorals. The effect takes us to other acquaintances and distant places beyond the space we occupy. It’s transporting.

Bill Primavera is a Realtor® associated with William Raveis Real Estate and Founder of Primavera Public Relations, Inc., the longest running public relations agency in Westchester (www.PrimaveraPR.com). His real estate site is www.PrimaveraRealEstate.com and his blog is www.TheHomeGuru.com. To engage the services of The Home Guru and his team to market your home for sale, call (914) 522-2076.