Lady Macbeth May Have Said “Out Damned Spot” but Sometimes We Can’t A Little Secret in One of Our Most Interesting Cities: Peekskill

Secret Paths and Gardens as Places to Transport Oneself 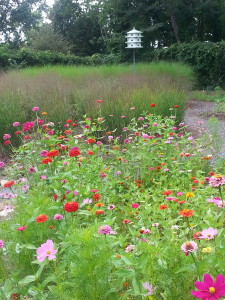 View of the Meditation Garden at the Constant White House in Yorktown, owned by
Joyce and George Harvey, which is for sale by The Home Guru.

When I was 10 years old, I had a summer experience of great wonderment. My father had taken a short term work assignment in Lynchburg, Virginia, and my mother, he and I took up temporary residence in an in-town ante-bellum mansion that had come upon hard times after the Civil War and was split up into rooms for transient tenants like us.

There was an unkempt back yard that was a bramble of underbrush that seemed all but impenetrable. In an apartment on the first floor of the building was a couple, Bella and Jake, who looked after the premises as caretakers. They were both world weary and Jake was particularly weather beaten. Sometimes in the late afternoon he would sit rocking on the back porch and tell me stories about the Civil War in which his dad had been a drummer as a boy.

One day while rocking on the back porch, perhaps observing that I was bored with nothing to do, he told me a secret. With a twinkle in his eye and whispering low, he related that, within all the bramble of the back reaches of the yard had been a beautiful formal garden, surrounded by a low wall and traversed by brick paths leading to a center fountain made of marble. It was still there, he told me, but now completely covered by years of vine and overgrowth that he estimated had been neglected from the time of World War I when the mistress of the property, before it had been converted to a multi-family dwelling, had died.

Can you imagine the effect the telling of this secret had on a highly curious boy of 10? Upon my begging, he allowed me to borrow his heavier garden tools from a shed and the majority of my days for the rest of the summer were spent, with his permission and my mother’s, cutting, hacking and pruning until I reached the outer rim of the fountain that had been long obscured. I didn’t totally finish the job before the time we had to leave town, but I did have time enough to create an effect in the dense growth much like the parting of the Red Sea.

Since that early experience, I have never regarded a lawn as just a lawn but as an opportunity to create hidden, private spaces for reflection. On the property of my own historic home, I have created shaded walkways made from bluestone and flat faced field stone, and in my head, I have planned a formal English garden for the broad expanse of my lawn, created when a 200 year old maple was felled by Sandy two years ago and changed the shady plane into a sunny one.

However, for some years I’ve had to concentrate more on urn and container gardening, leaving behind my bigger projects, like more secret paths and gardens, until my eventual retirement years, or at least that’s what I’ve been telling myself. I’m approaching an age when most mortals are at least thinking about retirement, yet I’m busier today than I was in my 30s, and it appears likely that this is not likely to happen any time soon, if at all. So, devoid of time to do much gardening myself, I live vicariously through others’ joy of gardening.

The most ingenious garden plan I’ve found in recent years is that of Joyce and George Harvey whose historic home, the Constant White House, I have listed for sale in Yorktown Heights. Behind the house, started in the early 1700s, is a “secret” meditation garden, hidden from view by plantings until you are upon it, that was ingeniously placed where an old tennis court had once been.

“The dimensions were determined by the pre-existing but dilapidated blacktop tennis court,” Joyce said in explaining how it came about. “Removing all the material was a Herculean task by a crew and excavator. We reused much of the gravel underneath the surface for the paths which were edged with recycled bricks from an old patio and lots of rocks and boulders unearthed during the demolition.

“There are several different seating areas, all with different views of the garden, as well as the rest of our property – our sweeping lawn, barn and pool,” she continued. “We simulate prairie-style waves of green with three circular beds of five different grasses of varying heights and hues. For color, there are swaths of undulating wildflower patches along the path as well as a native garden and horseshoe court.”

Considering some other exceptional amenities offered by this particular house designed to appeal to the mind, body and spirit – like a large soak tub/ jacuzzi for two, a barn with a second story gym/meditation space, and a beautiful pool, also surrounded by grasses and colorful perennials, I can personally guarantee that anyone lucky enough to acquire this particular house will be stress free while under its spell.

Bill Primavera is a Realtor® associated with William Raveis Real Estate and Founder of Primavera Public Relations, Inc., the longest running public relations agency in Westchester (www.PrimaveraPR.com), specializing in lifestyles, real estate and development. His real estate site is: www.PrimaveraRealEstate.com and his blog is: www.TheHomeGuru.com.  To engage the services of The Home Guru and his team to market your home for sale, call 914-522-2076.