Why Do Homes Appreciate While Most Things Tank in Value? Weighing In on Discrimination, Fair Housing and Zoning

Septics: What’s the Big To-Do about Where Doo Doo Goes? 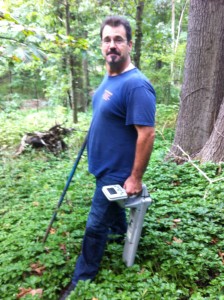 Andy Sabo of Cheap Snake hunts for a “lost” septic tank with his electronic locator.

If your house is on sewer, you may think that this piece about septics has no application to you, but as I understand it, as many as a third of us within the reach of this newspaper are on septic. And if you’re not, you may someday fall in love with a house that is, like I did.

Recently, when I started a home search for new clients, my first directive was, “Don’t show us anything that isn’t on sewer.” And yet, the couple preferred homes with privacy in more remote locations where, more often than not, there are no sewer lines.

As I become more a veteran in the real estate business, I tend more to gently nudge clients if I feel it’s for their own good. So, in response to that preference, I asked, “Why not? A septic system is not something to fear.”

The fact that my own 18th century house still had an abandoned outhouse in the yard when we first visited it should have led me to have some question about where the doo-doo went. But at the time, as such a young and naive kid who knew little about the way houses work, I never bothered to ask whether it was on septic or sewer. Imagine?

Once ensconced in our new home, we soon noticed that the sinks and showers were draining slowly and that the toilet wasn’t flushing properly. That’s when I realized that we probably had a septic tank that needed to be pumped. When the service people arrived, my wife and I were at first somewhat startled by the slogan on their lime green t-shirts that said, “Your s–t is our bread and butter!” We laughed nervously as city transplants to “deep country” at the time when the film “Deliverance” had just been released.

But after much poking around, they found a wonderfully built septic system. And, from what they could tell, it probably hadn’t been pumped in a very long time. But once the tank was pumped to remove the sludge on the bottom and the scum from the top, we never had a moment’s problem with it. The only maintenance we do, when we remember, is to pump it every five years to keep it in top working condition. Now Westchester County requires that septics be pumped every three years, soon to be upgraded to two years, but one septic expert told me it’s not necessary to pump that often, suggesting that the county boosts tax revenue in this way. But, who knows?

The septic tank comes to us courtesy of a French inventor named John Mouras around the year 1860. The components he established then are still pretty much in effect: the house drain connects to the septic tank where all wastes either settle or float. Heavy solids sink to the bottom where they are broken down by bacteria to form sludge, while the lighter solids rise to the surface as scum. This process allows the wastewater in between to be released to the absorption field.

To show the efficacy of a good septic system, I have been involved with the sale of a Frank Lloyd Wright tutored home built in 1962 and when it came time to check the septic tank, we couldn’t find it. The testing service came over and we poked and prodded for a long time, working on an old survey, and it was no place to be found. So we called in Andy Sabo of Cheap Snake who had to place a snake with a camera down the waste pipe and he shoved it through quite a distance to the tank. Then he took a “locator” to connect with the frequency of the camera and, at last, we found the tank in a very unlikely location, next to a giant tree that certainly wasn’t there 50 years ago. When the lid was lifted, maybe for the first time in a quarter of a century at least, the tank was clean with a minimum of sludge and practically no scum on top. When things work, they work.

Anyone who needs any kind of pipe snaked can enlist the technical expertise of Cheap Snake at 914-962-1641.