The Kitchen Trends Again to White, Now Iced but Red Hot Don’t Read This If You Enjoy Breathing Deeply at Home

Some Invaders Strangle Our Landscape, Others Eat It Up 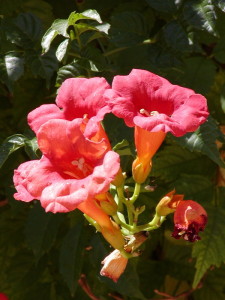 Recently I read an article online warning of nine plants we should never have on our properties because of their invasive nature, literally taking over the landscape. I was reminded that of the nine deadly sinners, I currently harbor three of them.

In order of viciousness in bullying their way into the landscape, they are: wisteria, bamboo and trumpet vine. Wisteria was here when I arrived. Bamboo and trumpet vine I invited in, the first because I think it’s beautiful and the latter, to quickly cover an aging stockade fence.

On the same day, I read about how a different kind of predator, the animal kind, specifically white-tailed deer, was removing everything from what is known as the “underbrush” of our woods and forests, threatening their very survival.

On my property, deer relish my hosta, phlox, and climing geranium, as well as the leaves from the lower reaches of my weeping cherry, leaving naked branches. Even though I spray everything the deer like to eat with Bobbex repellent, whose smell is so fowl that it repells me as well, I sometimes fail to spray every 30 days during growing season, and wake up one morning to find that my plantings have been eaten alive.

Too bad that these two phenomena, both plant and animal, don’t somehow cancel out each other, but that’s just the way the balance of nature is being tampered with lately.

Half of my property is wooded and, as a result of the recent superstorms Irene and Sandy, it has developed a new profile just in the past few years. When the storms took down a swath of sugar maples, cherry and ash, almost a quarter acre was laid bare. But nature, regenerative as it is, has given me a new, dense thicket of young trees there that are now about 15 feet high. There’s one problem: they are all locusts, Deer gobble up the maple saplings but eschew those of the locust because they are very thorny. I suspect that if I want to have my woods repopulated with maple and cherry, I’d have to buy them from a nursery at a stage where they’ve already grown beyond a deer’s eager reach.

To deal with the deer problem, I could fence in my property totally, including the driveway which is now the property’s only entry point. To deal with the invasive plants, I have another plan: containment.

When I first moved to my property, I fell in love with draping garlands of wisteria hanging over 60 feet in the air, trapsing from one tree to the other. It was gorgeous. But an arborist warned that all the host trees would soon be dead – and some already were – if I didn’t cut the strangling vines off at their core. Taking his advice, I was actually depressed viewing those hanging, dead vines with all the blossoms gone. I wonder what would have been the harm if the host trees died? I suspect the strength of the thick wisteria vines could have held the trees’ carcasses up on their own.

Today, I still allow wisteria to grow on my property, but I prune the vines before they climb into the trees. It’s the same with my trumpet vines. When I planted the aggresive trumpet vines, I contained them by placing the roots within a large bucket so that they don’t take over the property.

Some years ago when I was visiting friends in Orange County, California, I was arrested by the beauty of the bamboo that shielded their pool from their neighbor’s property and I made a mental note of wanting to have some of my own someday.

But I had already heard the stories of how it can invade a property to the point of destroying basement walls and pushing up driveway blacktop. Nevertheless, I chose to plant some on the perimeters of my property, having been assured by my landscaper that it was not the most aggressive variety. But that caution doesn’t matter in some communities.

In the Long Island town of Malverne, the town council recently passed a law making the planting of any bamboo variety a crime punishable by a $350.00 per week fine until it is removed or 15 days in jail. Imagine. While you might find the beauty of an invasive plant arresting, you can be arrested for planting it!