Why Do We All Seem to Need Pretty Pictures on the Wall? Chicken Little Could Have Used a Little Bedside Manner

Soon that Familiar “Ring, Ring” at Home Will Be Totally Zapped 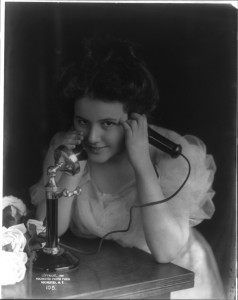 When I was a kid in the dark ages, my family had but one telephone in our home, placed atop a designated “telephone table” in our entrance hall. It was a heavy, black pedestal model left over from the 1940s that rang loudly enough to alert everyone in the house and, whether in the kitchen, bedroom or basement, one or more of us came running to answer it.

Today, my home has a landline telephone in practically every room except the bathroom, but no one responds to the ring anymore because, despite the national Do Not Call registry, it is most frequently a scammer’s robocall.

Will that familiar ring, ring of home phones soon be totally zapped in favor of the buzz or vibration of our cell phones?  Let’s face it, it’s already happening.

According to a study done at the end of 2012 by the Centers for Disease Control, which has relied on calling land lines to collect its data, 35 percent of American homes no longer have land line home phones, while 16 percent have both land line and wireless telephones, but receive almost all calls on wireless phones.

It’s both exciting and sad that, with the advent of cell phones, we have instant and ubiquitous accessibility today, even in the bathroom. And, our children will never know the logistics and designs involved in having a private telephone conversation in the pre-cordless era, from stretching a long cord around a corner to one’s own partially-closed door, to unplugging the phone from its jack and taking the entire device with you to another room.

Nor will they ever know about the other little quirks in the history of the home telephone. When was the last time, for instance, that you heard the term “party line?” For me, it took on meaning when my family moved to Virginia during a time of limited telephone lines and most people had to share a line with one or more other families. At 11 years old, my neighborhood buddy Tommy and I would listen in secretly to that anonymous woman who was quite verbal with her extra-marital boyfriend.  It was a party line, all right. We didn’t need sexting in those days to learn about the birds and the bees.

Alexander Graham Bell’s first telephone patent in 1876 indicates that the telephone was initially meant as an improvement to the telegraph.  Throughout the 1890s, the design of the telephone changed to reflect the way it was used. The earliest models were wall-mounted “coffin” units – so called because of their wooden, boxy shape.  The single receiver separated out into a mouthpiece and an earpiece, and a numberless crank was added to signal the operator.

The operator placed calls simply by knowing which line connected to which household. The first phone numbers in the U.S. were introduced in Lowell, Massachusetts, in response to a measles outbreak. Doctors feared that if the regular operators fell ill, their substitutes would have difficulty connecting calls unless there was a system of numbers to guide them.

In 1905, the candlestick phone models were introduced, complete with the first rudimentary dial so callers could enter their desired phone numbers on their own. For convenience, this desk set gradually replaced the clunky wall model, although one still needed to hold the base with the mouthpiece in one hand and the earpiece in the other.

The design that finally incorporated the ear- and mouthpiece into one handset was a Western Electric phone introduced in 1927.  This new handset left the caller with one hand free to take notes or go through papers.  This basic design was revamped by industrial designer Henry Dreyfuss and eventually became the most-produced dial phone model in history.

By the late 1950s, phones were available in a variety of colors, but any choice other than basic black brought with it an additional monthly fee. Western Electric dropped this charge in the 1950s, replacing it with a one-time installation fee.

With phones now serving a decorative as well as a practical purpose, the Princess phone was introduced as a second household telephone, with a sleek, low profile that fit well on an end table or night table. The Trimline phone, introduced in 1965, was the lightest and slimmest phone yet, with a rotary dial installed right into the handset. It was also available as a wall mounted unit with a long cord to permit freedom of movement.

The Trimline was the last standard-rotary dial telephone manufactured by Western Electric. Touch-tone phones became available to the general public in 1963, and would quickly overtake rotary phones in popularity.

Before too long, function would triumph over design once again with the introduction of the cordless phone in the 1980s.  The bases and antennae of these first systems were ungainly, but their convenience meant that there would be no turning back.  Now we all walk around looking at small screens in our palms where the telephone is but one function of a mini computer.

Nervously anticipating the eventual demise of the home phone, I wonder, what will I use to make my cell phone ring when I misplace it?