How I Added Pizzazz to My Home with Custom Lighting Brick by Brick: The Easiest Way to Build a Patio from Scratch

Surprising Information about Carpets vs. Hard Flooring and Air Quality 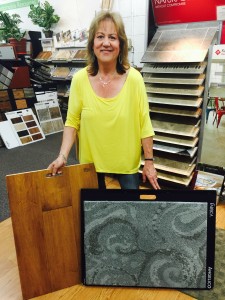 Diane Darby, Vice President, Marketing & Sales at Absolute Flooring, says that research proves that carpeting rather than hardwood is a better flooring choice for those concerned about air quality issues.

For years, from a style perspective, we’ve preferred the clean sleek look of hardwood floors over wall-to-wall carpeting, especially since we figured out that the costs were comparable. And, from a health consideration, we’ve had the perception in the media that hard surface flooring holds advantages over carpeting for allergy and asthma sufferers. But, just recently, I learned from Diane Darby, vice president, marketing and sales at Absolute Flooring in Yorktown Heights, that the opposite is true.

Whenever I have a question about any aspect of flooring, Diane always “floors” me, if you’ll pardon the pun, with her encyclopedic knowledge in the business and her exceptional ability to communicate that expertise clearly and concisely. “How did you acquire such wealth of information?” I asked her. “When I got into the business, I just listened to everything the reps could tell me,” was all she said, but I suspect that she’s just plain smart on top of that process. Also, as I learned with this particular issue, she does independent research.

So, when I read that one in 10 children and one in 12 adults suffer from asthma, and that many people believe carpeting affected asthma sufferers, I knew with whom I should check.

“Although most people come in to remove carpet when a child or an elderly person has some respiratory issue, I tell them that’s not what they should do, based on my research,” Diane told me when we got together.

“I found that there had been some studies done, the first one in the 1970s in Sweden, where in commercial buildings they had stopped using carpeting and went to hard surfaces specifically because the incidence of respiratory distress had risen so high in the country and they felt this was a direct correlation to the use of carpeting,” she said. “But in fact, what they found was that carpeting was better for holding allergens and other properties at bay that would normally be airborne until such time that they could be cleaned away, while hard surfaces allowed those allergens to become airborne with foot traffic. Studies proved that, in fact, carpeting was better.”

“But what about getting the allergens out of the carpeting?” I asked.

“There is that disclaimer,” Diane responded. “The carpeting must be well maintained. It should be vacuumed at least once a week and should be professionally cleaned every 18 to 24 months. As a matter of fact, this should be done anyway to maintain the carpet’s warranty in case there’s ever a claim. The preferred method is steam cleaning, or hot water extraction as it’s called so that the moisture is also removed.”

Diane added that wools should be dry cleaned with a product called Capture, a powder manufactured by Milliken which is poured on the carpet and vacuumed away.

My last question about carpeting vs. hardwood flooring involved the concern about off-gassing. “That has been addressed in the past few years by the manufacturers,” Diane said, “and, further, once the carpet arrives in our warehouse, we unwrap it from the plastic and aerate it until it’s ready to be installed in the consumer’s home.

“So, bottom line, when we have a flooring customer talking about air quality issues in the home, we do recommend carpeting over hardwood,” Diane concluded.

No matter your question about flooring, it’s likely that Diane Darby of Absolute Flooring will have the answer. She can be reached at 914-245-0225. The website address is www.absoluteflooring.com.