The Allure of Red However or Wherever Used 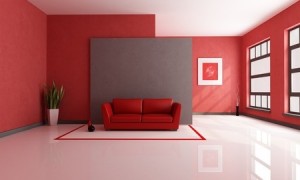 It never occurred to me as a 16-year-old that I was making a strong statement, given the first opportunity to decorate my own room, when I chose a really bright red for the walls.  My mother waited until I was in my thirties to finally tell me that she always knew I was “different,” so she would make allowances for me, growing up, no matter what I wanted to do. Also, it gave her a good story to tell for many years to come about how, when that house was put up for sale, prospective buyers in that conservative little southern town would enter the room and say, “wow!”

But let’s face it, red elicits a dramatic response, no matter where or how it is used, from lipstick to a power tie.  Remember the dress Scarlett O’Hara wore in the movie version of Gone with the Wind after the scandal broke of her indiscretion with Ashley Wilkes?  Or the color of the flocked walls in Belle Watling’s bordello? Always red, right?  Even the very names of various shades of red evoke drama, some even bordering on immoral:  Scarlet, Lust, Flame, Crimson, Wine, Oxblood.

Because red is so bold and captivating, it must be considered carefully and sometimes it is not always the best choice for a room.  I once owned a contemporary home in Putnam County with an open floorplan that flowed beautifully. The walls of the entry, living room, dining room and kitchen were originally painted an off-white with a pinkish cast to it. When I sold that property, the new owners decided to add dramatic color to the living room, which they painted a Tuscan gold, and the dining room a bright red.

When I visited them, I found that visually, the space seemed to have been reduced to half its size because both those colors can tend to draw a room in. But, because the eye is drawn to red, painting the wall at the end of a long hallway in red can be a good idea.

Benjamin Moore tells us that its Facebook fans pick bedrooms and bathrooms as their favorite rooms to paint red. That surprised me. I would have expected to find dining rooms and kitchens on the list since the color is said to both grab one’s focus (think stop signs and fire engines) and stimulate the appetite.

According to research studies conducted at the University of Rochester by psychologists Andrew Elliot and Daniela Niesta, the color red makes men feel more amorous toward women. Is it any wonder that the color has been adopted through the ages romantically for Valentine’s Day and lustfully for red-light districts?

When it came time to re-do the saltbox wing in my historic home, the flooring that had replaced the originally wide planked flooring probably sometime in the late 19th century was very lackluster.  Rather than refinish it, I decided to paint it a glossy bright barnyard red and it transformed the room dynamically.

If you’re more a conservative type and not ready to commit wholly to red, it can be used effectively as an accent, pulling it in through draperies or furniture.  Because red is so visually arresting, even one small red piece can transform a room.

It can be used in playful ways, such as on stair risers, the interior of a bookcase or china cabinet, or the legs of a table.

Red is not just that primary color but there are literally hundreds of reds, from high-octane orange tinted tones to subtler old fashioned purplish shades like burgundy, maroon and brick  that can evoke more traditional environments.

I once had a non-descript, very small mudroom that came with a green patterned wallpaper when I bought the house, but was transformed when I stripped the paper and painted the walls with a bright brick red paint. And, in my basic black and white kitchen, the perfect touch was added when I painted the stools for my kitchen counter Chinese red.

In several instances, I have taken red outdoors. For many years, I’ve been recommending that every front door should be painted red for its feng shui attributes and have gone so far as to recommend a particular shade: Benjamin Moore Burgundy.  And, on my back patio, one cast iron side table provides a nice focus to all the other pieces by standing out in red.

There is a local story I love to tell that’s connected to the reason that barns across America are painted red.  I recently was involved in the sale of what I call the Crayola Building in Peekskill. It was there in the later 19th century that Binney & Smith, the company that first made Crayola crayons, mixed the iron oxide pigments for the red paint that proved to be a good preservative on barns across the American landscape.  Don’t you just love that kind of history?

It makes you want to find out why people go out and paint the town red, rather than some other color!

Bill Primavera is a Realtor® associated with William Raveis Real Estate and Founder of Primavera Public Relations, Inc., (www.PrimaveraPR.com). His real estate site is www.PrimaveraRealEstate.com, and his blog is www.TheHomeGuru.com. To engage the services of The Home Guru to market your home for sale, call (914) 522-2076.