Reflections on Our Longest Term Sleeping Partner, the Mattress

The Teddy Bear House, a Tudor, Goes for Sale 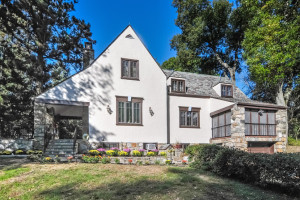 Every house has a story, some more exciting than others, but some kind of story, even with new construction if you consider what has gone into its planning and construction.

In my career as a realtor, I’ve had the pleasure to represent some houses with extraordinary stories, including my own, the Ebenezer White House, circa 1734, in Yorktown Heights, which I recently sold.  Now, my real estate partner Michael Pierce and I have just listed the Michtom House, circa 1926, aka, “The Teddy Bear” House, in Cortlandt Manor.

And why, you might ask, is it called The Teddy Bear House?  Because it was built as the country refuge for the family of Morris Michtom, the toymaker who developed and manufactured the original teddy bear in the early years of the 20th century, inspired by President Theodore “Teddy” Roosevelt. With the success of the teddy bear, Michtom went on to establish the Ideal Novelty and Toy Co.

A perfect example of the Tudor period, the four-bedroom, 2000 sq. ft. Michtom house sits on an acre on Briar Lane, a sleepy, tree-canopied road that harks back to a time when the area was primarily for leisure time activity for the well-to-do from the city.

Its owners, Diane and Bob Frissora have lived in this sturdy structure with its stucco outer walls and slate roof since 1971 and are emotional about placing it on the market, especially Diane. “It’s where we raised our family,” she says.  Bob, a builder, looks at the prospect of a sale more practically, saying, “How could you build a house like this today?  What would it cost using these materials?”

A special prospect of this particular property is that it has an adjacent one-acre buildable lot that is zoned two-family which is rare for upper Westchester. “This lot can be incorporated into the deal for the house…or not,” Bob said, “so it could be a family compound or purchased along with the house as an investment opportunity.”

There aren’t many true Tudors in upper Westchester like the Michtom home.  The style flourish in America from 1890 to 1940, and the area at that time was mostly small homes and summer cottages, rather than grander structures like this one.

In more urban settings, the style referred to as Tudor was based on a mix of late Medieval and early Renaissance styles. European-trained architects, influenced by Old World styles, brought the eclectic, asymmetrical Tudor style to America toward the end of the nineteenth century. Built for wealthy homeowners, Tudor houses were of solid masonry with elaborate decorative stone and brickwork. They were sometimes called “Stockbroker Tudor” because their financially successful owners had frequently made their wealth in the booming 1920s stock market.

These homes featured such elements as steeply pitched roofs, decorative half timbering, and embellished doorways.