The Most Frequently Asked Questions About Refinishing Floors Can’t Say “Mother/Daughter” Anymore? Is “Master Suite” Next to Go?

To Enlarge or Renovate Your Home, Hire an “Ombudsman” First! 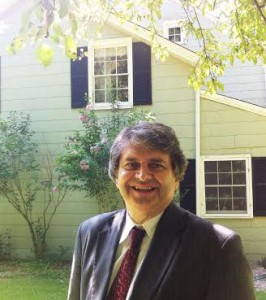 Home improvement “ombudsman” Richard Cirulli stands before the 1861 wing of The Home Guru’s Ebenezer White House to which a modern glass structure will be added. He will mentor the process with contractors.

It was more than 40 years ago, but I still feel the sting of being swindled by an unscrupulous home improvement contractor.

As a young couple, my wife and I had just managed to qualify for a mortgage and cobble together enough money for a down payment to buy our large historic house that at that time was in fairly poor condition. We didn’t have much money left for needed improvements but it was essential to renovate the mudroom which was literally falling off the house. It was the main entrance from the driveway to the kitchen and needed the works: a cement floor, new framing, roof, new door, insulation, a half bath, and closet.

Our friends Linda and Michael who had moved to Westchester just before us recommended a contractor who gave us a quote of $2,000 for job and told us he required a $500 deposit to pay for materials. Naïve as we were, we went with him, not knowing whether he was licensed or checking other references. He took our check, cashed it quickly, and we never saw him again.

Recently in the White Plains edition of this newspaper, I read about a new service that guards against this kind of thing happening to other homeowners who may be as naïve as I was then and, in many ways, still am. I thought it would be a good idea to share this information with other readers because so often I receive complaints about unsatisfactory home improvement jobs.

Called the Homeowners Ombudsman Program, the service was created by Richard Cirulli of Kymar Limited, a White Plains-based construction management company. Cirulli, who holds a doctorate degree in engineering, has spent over 30 years in facilities and construction management for major companies, and now in his own business, offers himself as an ombudsman, or advocate, to homeowners to protect themselves from making mistakes when renovating their homes.

“I should be the first person homeowners call when planning a home improvement, not a contractor,” Cirulli says. “For a reasonable consulting fee, an ombudsman can prevent a homeowner from the pitfalls so common to the industry. For instance, such an advocate knows enough to ask the contractor which bank would hold the client’s escrow account as required by New York State lien law. And he lets that contractor know that a waiver of liens will be required with each progress payment.”

I’ve been around the real estate and home improvement business for a long time and I’ve never heard of these requirements. Shame on me! Now I am aware and will suggest this mentorship program to all my clients planning to renovate.

In my own case, for many years, I have been dreaming about leaving my mark on my beloved Ebenezer White House, started in 1734, that has not had a change to its exterior appearance since 1861. I’ve delayed that decision year after year, probably because of that first bad experience that I ventured on my own. As I’ve disclosed time and again, the “guru” attached to my byline is only the expertise I channel from the real experts. On my own, I’m only a vessel.

I have already engaged my architect Michael Piccirillo for a novel idea. I’ve taken the shape of that 1861 wing, which is a story and a half structure with a lean-to on the back, making it appear like a saltbox, recreating it, attaching it in reverse and structuring it almost completely in glass, facing our pool and gardens. This will be the “open” floor plan I’ve coveted to complement the traditional proportions of the rest of the house. It should be a stunning modern statement, yet in complete harmony with the home’s heritage.

At our first meeting, Cirulli told me that he will study the plans, create a schedule for the project, spec the materials and estimate the costs. From there, he will set up an escrow fund and handle the employment and financial dealings with the subcontractors, always seeking my approval along the way.

The first step is to plan the re-grading of the lawn area upon which the new wing will sit so that there can be crawl space beneath the structure to accommodate the space needed for a new HVAC system that I plan to install throughout the house. Ebenezer White, with a little expert help, I can’t wait to introduce you to all the new technologies of the 21st century!

Ombudsman Richard Cirulli can be emailed at profcirulli@optonline.net or called directly at 845-380-2872