Doorbells: From Buzzing to Beethoven OMG! A Crazy World of Real Estate Abbreviations, from AO to ZB 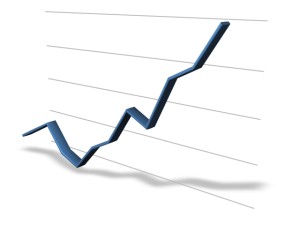 At least two or three  lifetimes ago when I was in the chorus of West Side Story in summer stock, I was envious as I listened in the wings each night when the actor playing Tony got to  sing “Something’s Coming,” the quintessential song of optimistic premonition.

I don’t know if I’m especially prescient or if everybody gets the same feelings, but I always seem to sense when something good is just around the corner.  And when I get that feeling, I find myself humming that song, and mouthing the lyrics, “Something’s coming, something good.”

About three months ago, I found myself humming that tune again.

After a half dozen dreary years of the Great Recession and its devastating impact on the real estate market, I experienced a disappointment that was nevertheless encouraging, as paradoxical as that may seem.  I placed an offer on behalf of a young couple to purchase a house that had been on the market for almost a year and, wouldn’t you know it, another bid appeared out of nowhere and beat out my client’s offer.  Then the next month, the same thing happened, but this time, my client outbid her competitor.  I had almost forgotten the term “bidding wars,” but here they were again.

At the same time, other realtors in my office started to complain that they had very little inventory to show an increased number of new buyer clients. We could feel the groundswell coming, although not yet reflected by sales figures.

And, another good sign: I started to get calls from my investor clients who want to buy fixer-uppers and flip them for a profit.  Investors had been the first to disappear when the bubble burst, but they’re back. It’s harder now to find bargain basement deals than when short sales and foreclosures approached the numbers of regular sales. But, investors are pressing on, even if they are paying higher purchase prices than they might have realized just a year ago.

Those of us in the business who rode out the worst of times are now busier than we’ve been since the crazy ride from 2002 to 2006 when the inflated market made sales in real estate easier to realize.

All these factors would tend to show that we are experiencing a gradual shift back to a seller’s market. A quarterly report released last week by the Hudson Gateway Association of Realtors (HGAR) would bear out these developments that had been mostly anecdotal since the beginning of the year.

The quickening pace of the market as reported by HGAR is attributed to several factors, including the pent-up demand by consumers who have to be in the market for one reason or another and who perceive the economy as improving.  Mortgage interest has continued to maintain low rates at an average of 4% or less for a 30-year conventional loan.  And, first-time homebuyers are being attracted to the market place as they perceive an unparalleled opportunity to buy affordably priced housing in our region, which is considered an expensive area.

At the same time, end of quarter inventory for Westchester stood at 3,080 units, representing a decrease of a whopping 20% since the same period last year, while in Putnam, inventory stood at 724 units, a decrease of 9%.

The median sales price in Westchester at $515,000 represented an increase since the same period last year of 1.9% and, in Putnam, where the median sale price was $286,500,  there was an increase of 2.7%.  Actually, home values improved more than those figures might indicate in that there is more focused activity on the sale of more reasonably priced homes.

I remember when the housing bubble burst in 2007, a friend and fellow realtor Diane Arenholz shared with me the prediction she had heard at a conference that the turnaround in the market wouldn’t occur until 2014. At the time, it seemed as though that would be an impossibly long period of a depressed market to endure. But here we are, in 2013, and that turnaround is beginning with significant vigor.

But let’s look at the most interesting real estate meet-ups we should be seeing this year, that of the young first-time homebuyers and the older home owners wanting to downsize who will now find it safe, even rewarding, to enter the market soon. My wife and I happen to be in the latter category, and we will welcome passing on the joy of a wonderful home to a new young family, as we were when we purchased it.