When Man-Made Rules Over Mother Nature Underfoot Believe It or Not, the Connection between Pianos and Real Estate

What Makes a Master Craftsman? Is It Learned or Innate? 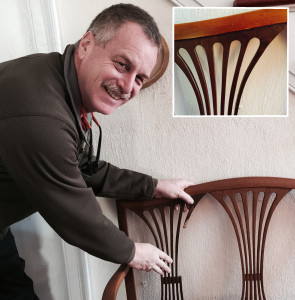 One of the favorite pieces my wife and I retrieved from our antiques shop when we closed it some years ago was a Sheraton-style (but not original) settee that is delicately made with three harp-like splats in the back. We’ve always had it in our central hall as though guests might linger there if they wanted to, but it was mainly for show and rarely ever sat on.

Somewhere along the way, however, one of the splat’s spokes had broken away and because of that, the settee had lost much of its value. However, with a big throw pillow covering its flaw, it was still pretty to look at, but I had no idea or plan of ever getting it repaired. But then I met Brad Goodman, assistant building inspector in my hometown of Yorktown. Lorin in my PR office had told me that he was an extraordinary craftsman and could “build and repair” anything made of wood. I was fascinated. “Can you repair that broken splat so that it doesn’t show?” I asked.

Without missing a beat, he responded, “Yes, I have a workshop where I have all the tools I need to do all of that.” I pressed him further saying, “but HOW do you know how to do those things, tell me.” Shrugging his shoulders, he said modestly, “I just picked it up along the way from the time my mother sent me to a YHMA woodworking class when I was eight years old.”

(Coincidentally, I was sent to a class when I was ten to make something out of wood, a Bible holder to be hung on a wall, which I still possess, and in my case, I somehow feel I committed a religious desecration.)

“Did you see the movie ‘Amadeus’?” Goodman asked me, referring to the story of Mozart and his arch rival Salieri where they were both talented, but Mozart’s work came naturally and Salieri had to work harder to get the same results. “I wouldn’t compare myself to Mozart, but building things all came easily and naturally to me.”

After that first woodworking class, other classes followed that helped cultivate his practice of craftsmanship including art and sculpture, and from that time, he pursued two passions: making furniture and, as a musician (or “bluesician” as he calls himself), the making of guitars.

When he as young as 20, Goodman purchased his first business, an antiques store in Scarsdale, with his mother and younger brother. That evolved into a kitchen sales business and from there, his entrepreneurial pursuits brought him into the tiling, plumbing and electrical businesses until the physical labor aspect of those jobs took their toll on his body. At that point, he transitioned into functioning as a building superintendent for a contractor for some years until taking his current job as a building inspector.

Goodman took my settee for repair and when I received the call that the job was done, I asked if I could visit his shop which is in the lower level of his expanded raised ranch high on a hill in Brewster. There, the large space is filled with all of his automated equipment to which he oriented me: a machinist’s lathe, a jointer, plainer, band saw, a BIG band saw, a pin router, a table saw, and a panel saw. Then he revealed my repaired settee and, for the life of me, I could not determine which spoke of the splat had been broken off. This man should be a restorer in a museum and yet, his talent is available at reasonable cost to any homeowner who needs repair, big or small.

As I explored Goodman’s journey to becoming a true craftsman, I kept asking myself the same question: Would it have been possible if I had applied myself that I too might have become a true craftsman? I really doubt it.

While Goodman modestly quoted Thomas Edison when he said that genius is one percent inspiration and 99 percent perspiration, I believe there is definitely something innate, a special knack, a certain “eye” that some of us have and others don’t. Brad Goodman definitely has it, and I definitely don’t. If you would like his brand of genius put to work for your special project, whether a big kitchen or a small repair, he can be reached at 845-480-6840.

Bill Primavera is a Realtor® associated with William Raveis Real Estate and Founder of Primavera Public Relations, Inc., the longest running public relations agency in Westchester (www.PrimaveraPR.com). His real estate site is: www.PrimaveraRealEstate.com and his blog is: www.TheHomeGuru.com. To engage the services of The Home Guru and his team to market your home for sale, call 914-522-2076.