Don’t Let Your House Get Caught with Its Pants Down! It’s a Bird! It’s a Plane! No, It’s a Stink Bug!

When Homeowners Decide Who They Don’t Want as Neighbors 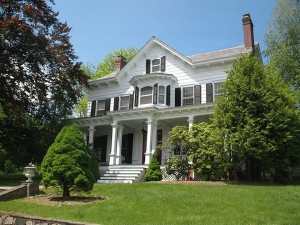 “Don’t believe anything you hear and only half of what you see,” was one of my mother’s favorite expressions when teaching me how to find my way in life.  When I became old enough to think for myself, however, I would say to myself, what kind of nonsense is that?

But after a fancy, formal education as well as enduring a rather rigorous college of hard knocks, I find myself still relying a lot on those pearls of wisdom doled out at my mother’s knee. From time to time, however, I forget.  Recently, I found myself in a situation where I believed everything I heard when I shouldn’t have.  And I was ashamed of myself for it.

As registered voters where we own homes, we all take part in the process of shaping what our towns are and what they are to become in the future. Through zoning codes and by whom we elect as our town officials and by whom we appoint to our planning and zoning boards, we also determine who gets the privilege to live next door to us and down the street from us, even the types of houses they can live in and what kinds of businesses they can open to serve us.

And some would say that we have even more control on such situations depending on how much money we have in our pockets and how much we pay in taxes – local, state and federal laws notwithstanding.

All of these factors became crystal clear to me little more than a week ago in my own hometown of Yorktown Heights when I attended a town board meeting.  A group of citizens had gathered to protest the application for a special use permit  that would allow a large single family home to operate as a “sober living” residence that would temporarily house people who had been treated for substance abuse to help them transition back into their communities.

The surrounding neighbors had organized quite effectively to block any such use.  If I were to believe what I heard that evening, it would seem that my community was about to be invaded by criminals who would endanger my safety, sexual predators that would be after our children and substance abusers who would be dealing drugs on the streets.   Besides all that, property values would plummet.

One woman in particular, a lawyer who was a lead spokesperson for the group, did a grand job of presenting her case as though she were pandering to a jury, building to a crescendo, rousing the crowd to a frenzy and milking applause from her claque.  When she finished presenting the evidence, I found myself believing every word she spewed out and went home hoping the application would be denied.

But life is strange. Besides being The Home Guru, I also happen to be the founder of the longest running public relations firm in Westchester. No sooner had I arrived home than I found an email from an unknown sender which at first I thought was spam, but on an inexplicable impulse, I took a chance and opened it to find that it was from the very applicant who was seeking the special use permit, asking if he could meet with me.

I replied yes, curious to hear his side of the story. The next day, he arrived with two associates and in a clear and concise way was able to educate me about the background and professional experience of all parties associated with the organization, its methods of operation, its screening processes, the safeguards in place, its mission and goals, all of which were solidly grounded in principle and practice.

From my years of experience in communications I know a thing or two about separating the wheat from the chaff, and I was actually ashamed to realize that unwittingly I had allowed myself to become part of the lynch mob, part of the Salem witch trials, part of the group that would deny fair access and fair housing to other responsible citizens and businesses who have just as much right to share my community as I do. And as for the suggestion that property values would plummet, as a realtor I know that there is no real evidence that supports such speculation.

Bottom line: I am now involved, and not just for my own town, but for all the towns we live in. I am on board to fight this kind of bias and discrimination. To me, this issue goes beyond the application for a special use permit.  It speaks to an overriding big picture of what kind of town I want to live in and what it might become in the future.

To me this application symbolizes either the best that a town can be  – a progressive community of neighbor helping neighbor, one of diversity and acceptance – or the worst it can be, an exclusionary place that erects walls to ban certain kinds of people based on rumor, discrimination and fear mongering.

Which will it be?

I will keep you posted on what happens in my own town with this issue and, if you agree with me about the kind of town we should all want to live in, please keep alert in your town and, should any hint of this kind of vigilantism ever rear its ugly head, like me, be prepared to do something about it.