How Lucky We Are To Live Right Here! Home Inspections: The Good, Bad and Questionable

When the Time Comes to Deal with “Difficult” Neighbors 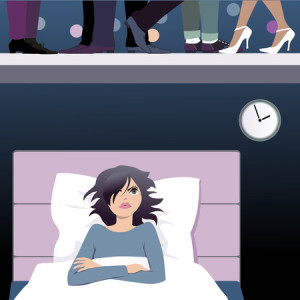 No man is an island, nor would he or she wish to exist as one, but there were a couple of occasions, especially when I lived in an apartment building that was not well insulated for sound, when I wished I were. According to a survey by Trulia, 67 percent of people like their neighbors. Should that leave us to assume that the other 33 percent of us don’t like them for some reason?

The nature of neighbor complaints depend on the type of domiciles involved. If we live in apartments or condos, they might be mostly about noise above or through contiguous walls. If we live in single family homes, they are probably more about trash handling or visual blight.

I remember that years ago there was a case considered visual blight on my block that was both controversial and amusing at the same time. There was a very colorful free spirit living midway down the block who was a taxidermist. Somewhere along the way he had acquired a large promotional statue of an Indian chief, close to 20 feet tall that stood majestically at the end of his driveway, one hand outstretched to the sky. It could be seen from a distance as you drove down the street. Some of us considered it a welcome landmark. Others were not amused.

When it came time for the house to be sold across the street, the homeowner was distressed that the outlandish yard embellishment would discourage all prospects. As it happened, a young couple with whom we became friends fell in love with the house and felt welcomed by the Indian chief across the street extending the hand of friendship. To each his own.

My last report on the subject of neighbor complaints was based on a survey taken from the annual log of my hometown code enforcer, listed in order of frequency as follows:

Complaint #1: Trash. Surprised? I was. The complaints deal with how trash is handled, bundled, where it is placed or whether it blows on to other neighbors’ properties.

Complaint #2: Fences. There can be trouble when a fence is constructed with the “ugly” side facing a neighbor, when town codes usually specify that the decorative side must face away from the house. This complaint is so endemic that fence manufacturers have invented the fence where both sides are decorative.

Complaint # 3 and #4. Trees. Part A of the complaint is when a tree on one person’s property is hanging over a neighbor’s yard, casting shade or dropping leaves or limbs. Part B is removing mature trees when they significantly change the landscape. Most towns have tree ordinances to prevent this, but it happens anyway.

Complaint #5: Visual Blight. This is a broad category and can involve anything from excessive numbers of vehicles in driveways to non-repair of a home’s exterior or any pile of stuff that is covered with that horrible shade of blue plastic.

Complaint #7: Signs. The ubiquitous “tag sale” signs attached to telephone poles, which is a patently illegal place to place them. The double dip of annoyance is when the offenders fail to come back to remove them after the sale.

Complaint # 8: Dogs. Continuous barking is the main issue with dogs, and some towns have specific allowable time frames considered acceptable to let dogs bark. In my town, a resident can complain after 15 minutes of continuous barking.

Complaint # 9: Water Runoff. When a new construction project creates water runoff on another property, the complaint usually goes first to the code enforcer, but then to the town board and town engineer to try to get something done about it.

Complaint #10: Outdoor Lighting. This is a distant last category. Perhaps because of security measures or safety, there seems to be more outdoor lighting used today, which sometimes is pitched directly at neighbors’ bedroom windows.

For those facing neighbor problems, here are a few suggestions gleaned from various sources of expertise to ward off explosive situations. Basically, sound advice is to talk it out. Call ahead and plan a time “to talk.” Meet in neutral territory, on the sidewalk or property line. Don’t accuse; explain the problem and ask how it might be solved together.

If that doesn’t work, check local noise and disturbance ordinances and write a personal letter to the neighbor, offering a solution. If you have a condo or block association, they can send a standard letter citing a code or by-law. The best resolution is to alleviate the problem through open communications without having to call the local precinct or filing a complaint in court.